The purpose of R.eaders I.mbibing P.eril VII is to enjoy books and movies/television that could be classified (by you) as: Mystery. Suspense. Thriller. Dark Fantasy. Gothic. Horror. Supernatural. Or anything sufficiently moody that shares a kinship with the above.

I’m going to post my R.I.P. progress on Tuesdays during September and October and link them to the review site if they contain reviews of short stories, TV shows, or movies. Books will get their own posts.

It’s been a slow week in R.I.P.-land. I’ve been finishing up reading other books, writing some, and, well, working on a Halloween-themed EverQuest 2 project. 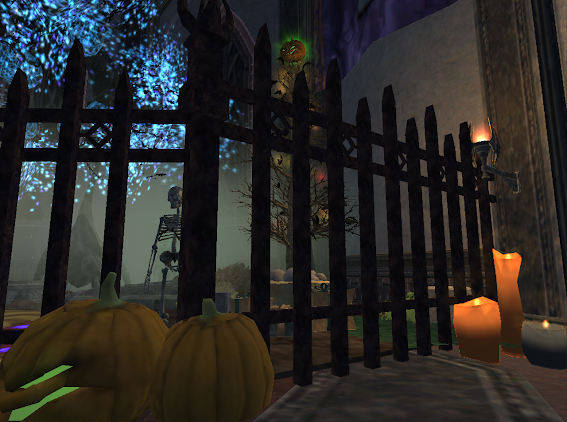 I don’t have a screenshot of my current project, but these are decorations from last year.

CBS’s Elementary finally premiered. Starring Johnny Lee Miller as Sherlock Holmes and Lucy Liu as Joan Watson, this show has a little controversy behind it. The BBC, you see, has Sherlock, a modern-day take on Sherlock Holmes. It’s quite popular and quite good. And since the US often remakes British shows, Elementary was hostilely seen as the American rip-off of Sherlock. Which is ridiculous. A.) It’s Sherlock Holmes. The characters and the set up have been done, done, and redone. There are 46 Sherlock Holmes movies listed on Wikipedia; 16 television series. B.) This isn’t Sherlock. It’s not like the horror-show that was the US version of Coupling (talk about being in peril!) or the rather lack-luster rendition of Life on Mars. Elementary is a totally different show.

Does it work? Eh, some of the references to canon felt forced. Some of the chemistry between characters hasn’t gelled. The plot wasn’t much different in feel than many other US mystery shows, like Castle. It wasn’t bad, but it wasn’t great. I’m hoping it will get better because I’m a sucker for Holmes. (For US readers, the pilot is still available at CBS.)