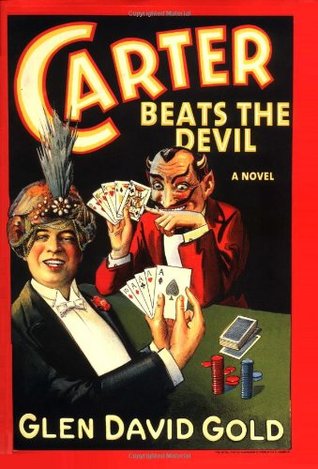 Gold’s debut novel opens with real-life magician Charles Carter executing a particularly grisly trick, using President Warren G. Harding as a volunteer. Shortly afterwards, Harding dies mysteriously in his San Francisco hotel room, and Carter is forced to flee the country. Or does he? It’s only the first of many misdirections in a magical performance by Gold. In the course of subsequent pages, Carter finds himself pursued by the most hapless of FBI agents; falls in love with a beautiful, outspoken blind woman; and confronts an old nemesis bent on destroying him. Throw in countless stunning (and historically accurate) illusions, some beautifully rendered period detail, and historical figures like young inventor Philo T. Farnsworth and self-made millionaire Francis “Borax” Smith, and you have old-fashioned entertainment executed with a decidedly modern sensibility. (via Goodreads)

Back in September of last year, I added Hiding the Elephant by Jim Steinmeyer to my reading queue. I was (and still am) in the process of researching and writing a historical fiction about amateur magician David Abbott. A friend from ultimate frisbee saw the Steinmeyer and its poster-eque cover art and offered to loan to me Carter Beats the Devil. I’ll admit, I didn’t get to it directly. The book starts a little slow and I left it behind on my sudden trip to Omaha in October. And the planned trip to Omaha in December. And then there was NaNoWriMo in November. When I finally got back to in late January, I pretty much devoured this book.

I went back and forth really, loving Carter Beats the Devil and shaking my fist at Gold for writing such a great book in a genre I’m entering. The latter attitude is, of course, ridiculous. Whatever I write is my own and will have its own merits. But man. This book… I loved the characters. I’d have dinner and a beer with each and every one of them. Well, except for Mysterioso, that putz. The characters all have their quirks and their faults. They love and hate and (some of them) get captured by pirates. (I’d even have a beer with the pirates.)

I was surprised by the historical details that were weaved into the story. As the summary text implies, we start with Pres. Harding and his death. Obviously, some of the plot was going to include whatever mystery goes along with a dead president. I wasn’t expecting Philo Farnsworth, the inventor of the TV. I wasn’t expecting the subterfuge and the use of almost every detail Gold brings into the story.  Usually, I’d be a little put out by an author’s need to tie up every loose end, even ends that a reader might have forgotten were loose. In this book, the completely pulled together ending was satisfying. And Gold pulls it off marvelously like a perfect magic trick. Man. This book…

Genre: Literary Mystery
Why did I choose to read this book? Recommended to me. (Ken, you’ll get your book back…er…eventually!)
Did I finish this book? (If not, why?) Yes!
Craft Lessons: …And did I mention how wonderfully rendered San Francisco is as a setting? Before I read Carter Beats the Devil, before I embarked on the first draft of One Ahead (my Abbott book), I decided I wanted to do two things: Do right by magic, and do right by early 20th century Omaha.
Format: Trade paperback.
Procurement: Loaned to me.
Bookmark: A calling card.