My intention was to start my rewrite of One Ahead in February, but every time I started rewriting, I ended up researching instead. So, I gave in, got a 30-day membership to Genealogy Bank, and have been wading through PDFs of Omaha newspapers ever since. I have two more weeks to my subscription in which to solidify the time period I want to use (I think I’m going to move it from 1906-ish to 1912, after the death of Alice (Abbott) Rowe) and take a look at the Kirkendall family at around that time.

February was a very social month for me.* Spring frisbee league started. There was the Superbowl Party at Laura & Josh’s, Tricia birthday gathering at Four Peaks, dinner with Tyler at Thirsty Lion, and the Skirt Chaser 5K. This was the fourth year I ran the Skirt Chaser. I turned in the worst time of my four years, but was actually more pleased than I’ve been the last two years. I’m currently 10-ish pounds heavy and hadn’t run much since the last Skirt Chaser, but still (barely) kept my time under 30min. 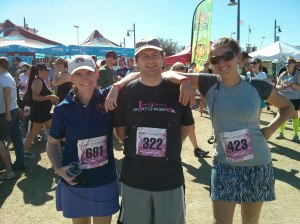 *For an introvert, anything beyond hanging out with people one evening in a month is “very social.”

The first in a series featuring a transvestite sleuth and a the adventures of a group of Space Marines. That’s what I call diversity. Both from PaperbackSwap.

In the land of short stories, I meant to start in on the Nebula nominees, but ended up finishing up The Case-book of Sherlock Holmes instead.

Other Books I Want to Read

At the Greater Phoenix Digital Library: