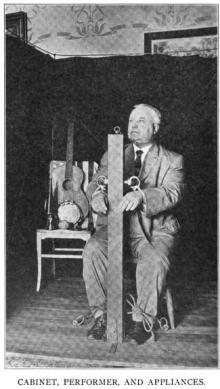 Behind the Scenes with the Mediums by David Phelps Abbott

There are those among us who cannot accept the promise of immortality on faith alone and require positive proof for any such belief. This volume discusses various types of Mediums; how they work, how some trick us, and how some do not use trickery. A sampling of the contents is as follows: spirit slate writing and billet tests; some modern sorcery; unusual mediumistic phenomena; materialization; relation of mediumship to palmistry, astrology and fortune telling; performances of the Annie Eva Fay type. (via Goodreads)

The cross-out above is my own. David Abbott (the cabinet performer above) was a skeptic during the heyday of spiritualism. He was not opposed to the idea of the survival of the spirit after death, but this book is a refutation and expose of the techniques used by mediums of the era. Abbott himself was a parlor magician, well-respected by his peers, but rarely performed magic outside his own home. He was not interested in profiting from his talents and was disdainful of mediums who took advantage of grieving clients. There really isn’t a portion of this book about mediums not using trickery. (In later years, Abbott did encounter a few things that he couldn’t explain. While newspaper coverage seemed to paint him as a believer because of this, his comments strike me as being on the cautious side.)

This isn’t a book for a “popular” audience. The majority of Behind the Scenes is about the nitty-gritty of slate and billet switching. These are the techniques behind “spirits” writing on blackboard slates and/or using a medium to answer questions asked on paper by sitters. No spoilers here; no spirits are involved. Instead it’s all a very skilled dance of information. The descriptions are repetitive and technical. I got a bit bogged down by it in the middle even though I find this stuff pretty interesting. The end portion, touching on other mediumistic phenomena like materializations, is a welcome change. I also finished up a few other of Abbott’s text in the last week or two. The photograph is from “Spiritualistic Materialization and Other Mediumistic Phenomena” an article published in The Open Court in 1919.

(As a side note, I’m going to share one of my favorite things I’ve read about David Abbott: In Houdini-esque style, before his death he told his wife that if  his spirit continued on, he would contact her or give her some sign. “Perhaps,” he suggested, “we should arrange some signal…so you can be sure I am the one talking.” Fannie Abbott replied, “After I’ve lived with you for 47 years I’ll know if it’s you.” [1])

Genre: Non-fiction
Why did I choose to read this book? Interested in the subject, writing a book featuring David Abbott.
Did I finish this book? (If not, why?) Yes. Took me a while, but yes.
Craft Lessons: Read for research.
Format: Scanned book. Not the best reading medium
Procurement: Most of David P. Abbott’s works are available for reading through Google books.