This book was provided to me by St. Martin’s Press and Minotaur Books via NetGalley in exchange for an honest review. 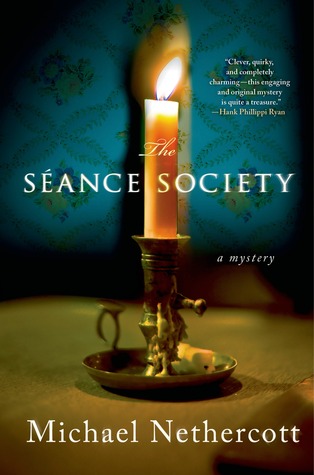 The Seance Society: A Mystery by Michael Nethercott

It’s 1956, and Lee Plunkett has taken over the family business as a private investigator despite his reluctance to follow in his father’s footsteps. When murder intrudes on a group of ghost seekers, Lee is asked to solve the case by a cop on the verge of retirement. At the urging of his perpetual fiancée Audrey, Lee enlists the help of Mr. O’Nelligan, a scholarly Irishman with a keen eye for solving mysteries. The duo is drawn into a murder investigation involving the “Spectricator,” a machine designed to communicate with the dead. Soon, Plunkett and O’Nelligan are knee-deep in a suspect pool that includes a surly medium, a former speakeasy queen, a mysterious Spanish widow, and a whole slew of eccentric servants. (via Goodreads)

Reading The Seance Society felt a little like watching a single random episode of a long-running television series. The characters and their situations are already in-progress. The back story isn’t hard to get caught up on and any resolution will happen in a future episode, but for the time being, it’s not hard to follow the plot. Lee Plunkett’s story is already in-progress. He’s already taken over his Dad’s business, he’s had a fiancee since forever, and this isn’t the first time O’Nelligan has helped him out. To belabor my analogy, as a reader, I’m joining this group mid-season. At the end of the story, Lee’s might be a little more at peace with the family business and we’ve learned a little about O’Nelligan’s past, but I was left with the feeling that these characters would continue in much the same way they started.

And that’s sort of the problem with this novel. It goes along in a perfectly fine way but it’s never really outstanding. In a TV series, this story wouldn’t be the must-see sweeps week episode. It would be the solid fourth episode of the fifth season that is entertaining, but nothing special.

The characters are fine. Lee and Plunkett are a nice team, but their dialogue felt staged at times. The suspects are a little eccentric, but never really made me laugh (if I was supposed to). Lee and Audrey’s relationship seemed to be very unimportant to this story. Audrey felt like background in Lee’s life. The plot is well put together. All beats are hit, the resolution is solid. I had hoped that the Spectricator and maybe some faux paranormal activity might play more of a role in the murder and the investigation, but the mystery is played pretty straight.

The Seance Society isn’t a bad book, but it’s not a great one either.

Genre: Mystery – It says so right on the tin.
Why did I choose to read this book? I was hoping that the seance aspect of this book was more prominent.
Did I finish this book? (If not, why?) Yes. It took a while though.
Craft Lessons: Don’t be afraid to go a little crazy.
Format: Kindle ebook
Procurement: NetGalley