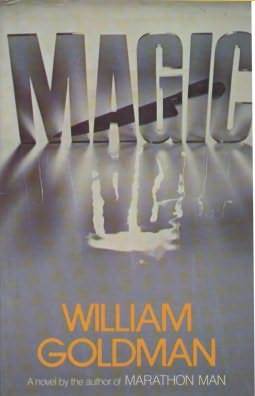 Starting out as a boy in the Catskills, Corky develops into a brilliant and famous magician whose long-hidden secret and expert skills attract dark forces intent on destroying him. (via Goodreads)

A.) That summary is…not great. The crux of Corky as a character is that without Fats and his ventriloquism act, he’s a pretty poor magician. That’s his secret. As for dark forces, well, I guess. Maybe. Can madness be considered a dark force?

B.) I was really surprised that I didn’t own this book when I looked for it earlier in the year. I like William Goldman. I like the short, screwy horror novels of the 1970s. How had I not read or acquired this book previously?

The novel begins with some journal entries labeled as Police Exhibits. These set a very sinister tone for the rest of the book. I had seen the movie version of Magic with Anthony Hopkins many years ago and mostly remembered the plot, but Goldman’s execution of it in novel form (he wrote the screenplay as well) is unsettling. As unsettling as ventriloquist’s dummy. There were a couple times during flashbacks to Corky’s childhood that were a little slow, but they’re paid off well enough later in the book.

Genre: Horror
Why did I choose to read this book? Looking at magic fiction, like Goldman, like 70s horror.
Did I finish this book? (If not, why?) Yep. It was a fast read.
Craft Lessons: Goldman does a few non-standard things that work, but I’m not sure a newbie can get away with being structurally unconventional.
Format: Good old-fashioned mass-market paperback.
Procurement: BookMaze