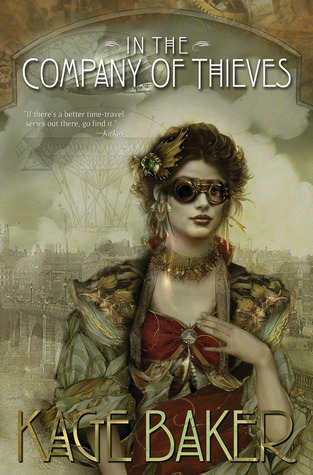 In the Company of Thieves by by Kage Baker

Espionage, time travel, and affairs gone terribly wrong define this final collection of Kage Baker’s stories in the Company series. The employees of Dr. Zeus Incorporated have discovered a nearly foolproof recipe for success: combining time travel and immortals. The Company, a powerful corporate entity in the 24th century, specializes in retrieving extraordinary treasures out of the past, gathered by cybernetically enhanced workers who pass as ordinary humans. Whether a client wants a jewel worn by Cleopatra, an original Shakespeare folio, or to make a baby with the genes of Socrates and Marilyn Monroe, Dr. Zeus can make dreams come true. The one rule that cannot be broken is that the recorded particulars of history cannot be changed. Functioning with extreme stealth and caution, the Company strives to avoid the curiosity and greed of everyday people, which proves to be more difficult than anyone could have foreseen. Included in this exciting collection are four previously uncollected stories, “Mother Aegypt”—a classic tale of Transylvanian intrigue, and “Hollywood Ikons,” a brand-new story from a collaboration with Kage’s sister, Kathleen Bartholomew. (via Goodreads)

Before I picked up In the Company of Thieves, I was mostly unfamiliar with Kage Baker and her Company series. I’d heard her name within the context of awards, but hadn’t read any of her fiction that I recall. (It’s possible that I’ve read a short story or two by her in the past without noting the author.) I also seem to lack reading comprehension when it comes to NetGalley book descriptions. It didn’t occur to me until I started reading that this was A.) an anthology and B.) set within an already existing setting. How much would I be hampered by not knowing what’s going on? The answer, thankfully, was that I wasn’t *too* lost, though the first half of the anthology was occasionally tough going.

The first story, “The Carpet Beds of Sutro Park,” is Company-light. Ezra, the young protagonist, is not exactly a roaring success in the land of Company operatives. Bio-mechanical manipulations have left him in an autistic-like state. Ezra’s job is to be a recorder of San Francisco throughout history. He watches the rise and fall of places…and people. It’s quiet and lyrical.

The next story, “The Unfortunate Gytt,” was the least successful for me. Marsh, our POV character, isn’t a member of the Company, but is included in their heist of Gyttite. Not being too much in the know about the Company and still not being given much context, I was generally a bit confused. I was game for the setting though: the Victorian Gentlemen’s Speculative Society.

“The Women of Nell Gwynne’s” continues with this Victorian sub-setting and brings in a huge dollop of sci-fi tech in the midst of corsets and polite euphemisms. It’s the longest piece of the collection with a large section of background for Lady Beatrice, a fallen but still courageous women. From looking at the cover, I was expecting the entire books to be like this. While it was an entertaining story, it was nothing like the next, “Mother Aegypt.”

I can’t quite remember the last time I had as much fun reading. “Mother Aegypt” is occasionally bittersweet, but with a POV character like putzy braggart con-man Barby Golescu, comedic situations abound. This story has a vampyr that likes corndogs and tonics for chickens. Those alone would probably sell the anthology to me. But, I was still without context for a few things and didn’t quite understand how this was a Company story. Until the last two stories.

“Rude Mechanicals” and “Hollywood Ikons” feature Lewis and Joseph, one story from each’s point of view. Both are Company men and, finally, I  get a good firm explanation about what it’s all about. Twice. The stories are arts heists, of a sort. Despite the cover blurb about “functioning with extreme stealth and caution,” these escapades are a comedy of errors. These immortals are, more or less, people with faults and proclivities as well as heightened strength and senses. There’s very little morose moaning about immorality because both enjoy their jobs, except when their jobs suck, which, you know, happens to all of us.

Baker’s characters are great. They’re witty with good strong voice. There is also a great sense of place, especially in the tales set in 20th century California. I’m interested in reading the Company novels, but that is certainly the setting that I’d like to see more of. As for the science fiction aspects, they’re not given any sort of science explanation in this volume. Time travel, as a contrivance, is a tricky thing. Luckily, I was really too busy enjoying myself to pick at whether it’s a sound premise or not.

Genre: Time travel-ish speculative fiction.
Why did I choose to read this book? Was looking for some current SF.
Did I finish this book? (If not, why?) Yes
Format: Kindle ebook/Adobe Digital Edition
Procurement: NetGalley