This book was provided to me by St. Martin’s Press & Minotaur Books via NetGalley in exchange for an honest review. 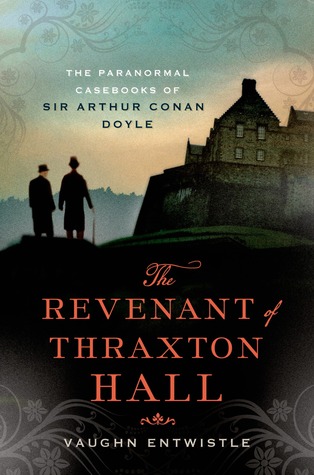 The Revenant of Thraxton Hall: The Paranormal Casebooks of Sir Arthur Conan Doyle by Vaughn Entwistle

Arthur Conan Doyle has just killed off Sherlock Holmes in “The Final Problem,” and he immediately becomes one of the most hated men in London. So when he is contacted by a medium “of some renown” and asked to investigate a murder, he jumps at the chance to get out of the city. The only thing is that the murder hasn’t happened yet—the medium, one Hope Thraxton, has foreseen that her death will occur at the third séance of a meeting of the Society for Psychical Research at her manor house in the English countryside.

Along for the ride is Conan Doyle’s good friend Oscar Wilde, and together they work to narrow down the list of suspects, which includes a mysterious foreign Count, a levitating magician, and an irritable old woman with a “familiar.” Meanwhile, Conan Doyle is enchanted by the plight of the capricious Hope Thraxton, who may or may not have a more complicated back-story than it first appears. As Conan Doyle and Wilde participate in séances and consider the possible motives of the assembled group, the clock ticks ever closer to Hope’s murder, in The Revenant of Thraxton Hall by Vaughn Entwistle. (via Goodreads)

One of my favorite movies is Ghostbusters. For me, it’s a nearly perfect ridiculous comedy, one I’ve gained more and more appreciation for as I’ve gotten older. I first watched it when it came out on cable, probably in 1985 when I was 10 years old. In 1986, The Real Ghostbusters cartoon was added to the Saturday morning line-up. While it featured the same characters and the same situation, it’s a softened, more out-right comedic show designed for a younger audience. Egon is blond and Slimer is a good ghost. I appreciated it, then and now, but it’s not *really* the same thing as Ghostbusters. The Revenant of Thraxton Hall presents a version of Arthur Conan Doyle and Oscar Wilde that feel like caricatures that could be a fun buddy team in a cartoon-style adventure. That’s not a bad thing. Unfortunately, The Revenant of Thraxton Hall isn’t entirely successful pulling that off.

In his Author’s Note, Vaughn Entwistle admits that he doesn’t let facts get in the way of a good story. The historical timeline is flexed. Doyle published “The Final Problem” in 1893. This is when the story is set. Daniel Dunglas Hume (Home in the story) died in 1886. The Society for Psychical Research probably did not have its very first meeting ten years after its formation in 1882. Yet, I’ll agree with Entwistle. The mixture of these elements makes for an interesting set-up. Some of the other liberties taken don’t pan out as well. I’m not usually one to complain about female characters, but Eleanor Mildred Sidgwick was, in reality, a proponent for the education of women and a leading figure in the Society for Psychical Research. To have her be just another woman fawning over Oscar Wilde and dashing Lord Webb left me kind of cold. In general, the Society was pretty toothless, barely bringing in any skepticism. The story could have been told without them. (Granted, if you’ve read any of the real Society’s studies, you’d realize scientific rigor often suffered.) Little historical details really bugged me as well. References like “the culprit is invariably the butler” and “a conjuring trick performed at a child’s birthday party” are not quite right for 1893.

There were a couple of times in the last third of the book when a few of the characters acted in strange ways with no plot reasons. The crux of the plot seemed to be rushed together with some leaps of logic. Unfortunately, the aspect that worked the least for me was Oscar Wilde. The character seemed too frivolous to be going, willingly, on this adventure even if he is Doyle’s friend. Now, if he had truly found himself entangled in it? That would have made more sense.

I really wanted to like this story. There were a lot of interesting elements. Maybe too many. Maybe a few things were still hammered out between ARC and publication, but it just didn’t feel cohesive enough.