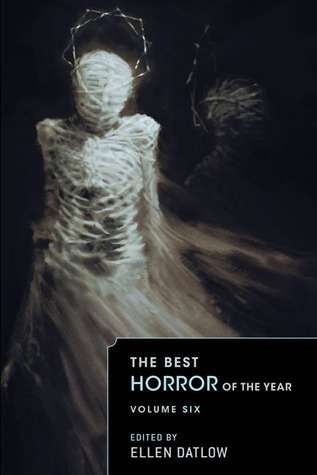 The Best Horror of the Year, Volume Six by Edited by Ellen Datlow

With each passing year, science, technology, and the march of time shine light into the craggy corners of the universe, making the fears of an earlier generation seem quaint. But this “light” creates its own shadows. The Best Horror of the Year, edited by Ellen Datlow, chronicles these shifting shadows. It is a catalog of terror, fear, and unpleasantness, as articulated by today’s most challenging and exciting writers.

The best horror writers of today do the same thing that horror writers of a hundred years ago did. They tell good stories—stories that scare us. And when these writers tell really good stories that really scare us, Ellen Datlow notices. She’s been noticing for more than a quarter century. For twenty-one years, she coedited The Year’s Best Fantasy and Horror, and for the last six years, she’s edited this series. In addition to this monumental cataloging of the best, she has edited hundreds of other horror anthologies and won numerous awards, including the Hugo, Bram Stoker, and World Fantasy awards.

More than any other editor or critic, Ellen Datlow has charted the shadowy abyss of horror fiction. Join her on this journey into the dark parts of the human heart . . . either for the first time . . . or once again. (via Goodreads)

Short fiction is a great way to keep up with writers and trends. I’ve often read the Hugo and Nebula nominated short stories to see “what’s up” in the world of science fiction and fantasy. Those stories are often available online. Horror is more difficult to keep tabs on for free. Usually, none of the Stoker nominated stories are available. I’m not sure what that says about the respective genre markets… Therefore, I am left with the occasional horror anthology.

Things that surprised me about this anthology:

The stories were all pretty solid, though varying in the amount of “horror” present. Of course, that’s a double whammy of subjectivity in a horror anthology. What are the “best” stories that define “horror.”

Stories that stood out for me:

On the severely creepy end of the spectrum, “Apports” by Stephen Bacon and  “Bones of Crow” by Ray Cluley.  Apports are “little gifts from elsewhere.” But sent by whom? Ray Cluley’s story probably wins for the goriest of the anthology. Both these tales feature people who are just trying to get by in life and find no help from the supernatural.

There were three stories with particular Victorian flair and were obviously up my alley. “Mr. Splitfoot” by Dale Bailey is written from the point of view of Maggie Fox, one of the young girls behind the founding of the spiritualist movement. Maybe they weren’t entirely charlatans…  “The Soul in the Bell Jar” by K. J. Kabza is sort of a Frankenstein tale in overdrive in a horror/fantasy world where souls are routinely sewn back onto bodies. Tim Casson’s “The Withering”introduces us to Miss Appleby, a Victorian heroine with a peculiar machine for contacting spirits. I’d read more of Miss Appleby if there was more to be had.

Two stories took horror on from a movie angle. “The House on Cobb Street” by Lynda E. Rucker is a solid haunted house story told in a found-footage kind of way, partially using blog posts and forum comments. Kim Newman’s “The Only Ending We Have” tells the story of Jayne Swallow, a body-double for Janet Leigh in the famous Psycho shower scene. Familiarity with the movie certainly helps in this story.

Speaking of Hitchcock, “Jaws of Saturn” by Laird Barron has a very noir, hitchcockian feel to it that reminded me strongly of Curse of the Demon even though the two stories have little in common.

Other stand-outs: “Call Out” by Steve Toase for using a bargest in his story. An underused creature if ever there was one. And to Neil Gaiman for “Down to the Sunless Sea” which was the only reread for me.

Publisher: Night Shade Books
Publication date: June 3rd 2014
Genre: Horror
Why did I choose to read this book? Haven’t read much good horror in a while.

2 thoughts on “Review ~ The Best Horror of the Year, Volume Six”