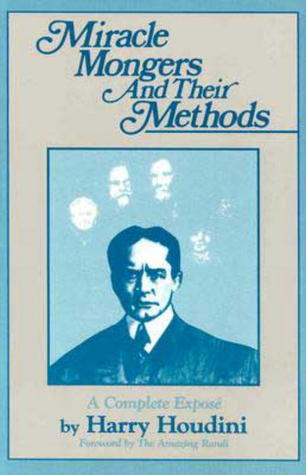 Miracle Mongers and Their Methods by Harry Houdini

The legendary magician and illusionist Harry Houdini turns a critical eye to the astonishing claims of those in his own profession. Using personal research and observations, Houdini reveals the cunning techniques employed by fire-eaters, sword swallowers, and other masters of deception to mystify and amaze audiences around the world. This classic skeptical work explores and exposes the methods of such “wonders” as “The Incombustible Spaniard,” “Defiers of Poisonous Reptiles,” and many others. Originally published in the 1920s, Miracle Mongers and Their Methods scrupulously examines the direct predecessors of modern psychics and mentalists. …(via Goodreads)

Making the jump to debunking psychics and mediums misses a rather important point about Houdini. He was an incredible athlete. Near the end of his career, he did indeed pit himself against mediums, but this book isn’t about that at all. This book is a catalog of the great purveyors of physical “miracles.” While Houdini does expose the techniques, there’s a great respect in this recitation of fire-eaters, sword-swallowers, poison defiers, strong men (and women) and the like. While Houdini was sensitive about his own methods being made public, he makes an important observation about exposure: Many of these performers were debunked time and time again during their careers without it hurting business.

I would guess that the text wasn’t really written by Houdini (he had ghost writers), but the source material was curated by him and I would say that the enthusiasm is certainly his. It should also be noted that any advice given about snake bite cures in this book is *terrible*.

What Am I Reading This Week?

What Am I Working On?

The first week of writing in July didn’t go as well as planned. I wasn’t feeling great and I got hung up on an action scene. I hate action scenes.

2 thoughts on “Magic Monday Review ~ Miracle Mongers and Their Methods”