This book was provided to me by HarperCollins Publishers Ltd via Edelweiss. 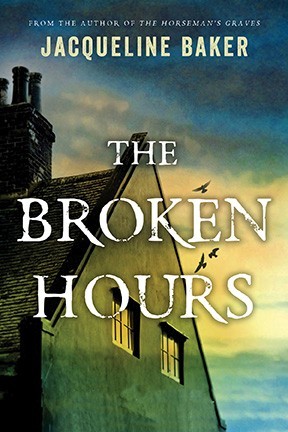 The Broken Hours by Jacqueline Baker

In the spring of 1936, horror writer H.P. Lovecraft is broke, living alone in a creaky old house, and deathly ill. At the edge of a nervous breakdown, he hires a personal assistant, Arthor Crandle. As the novel opens, Crandle arrives at Lovecraft’s home with no knowledge of the writer or his work but is soon drawn into his distinctly unnerving world: the malevolent presence that hovers on the landing; the ever-shining light from Lovecraft’s study, invisible from the street, and visions in the night of a white-clad girl in the walled garden. Add to this the arrival of a beautiful woman who may not be exactly what she seems, and Crandle is pulled deeper into the strange world of H.P. Lovecraft (a man known to Crandle only through letters, signed “Ech-Pi”), until Crandle begins to unravel the dark secret at its heart.

Lately, I’ve noticed a trend toward using speculative fiction authors as characters in novels. This isn’t a new phenomena, really, but it has struck me as more prevalent in the past year. I’ve reviewed two novels with Arthur Conan Doyle as a character and one with Shirley Jackson, all ARCs of works published this year. I’ve avoided many Edgar Allan Poe’s after realizing that he is my sacred cow. No author is going to write him in a way that will please me. Conversely, I have really no such opinion of H. P. Lovecraft. I’ve read a few of his stories and I’m peripherally aware of Cthulhu mythos, but I know little of the author as a man. (I’ve since read a bit about the controversy surrounding Lovecraft, his racism, and his likeness being used as the World Fantasy Award statue.) For me, knowing little about Lovecraft probably made The Broken Hours work better.

The Broken Hours is heavy on atmosphere. Baker starts us off in a cold winter rain storm. Any sun from there on seems purely coincidental. It is the atmosphere that powers this novel. This story is from Crandle’s first person POV. The narrative is dreamy and internal. All the dialogue is set off in italics rather than conventional punctuation, which keeps the story very much within his head. (A note about my ARC: The formatting of paragraphs and italics was occasionally messed up, causing me some problems. I’m sure this will be fixed in the final product.)  Crandle has his own secrets  and his past haunts him as much as the shadows in hallways or the little girl in the garden. There is a twist at the end of this novel that worked well enough, but did not surprise me.

Again, I don’t think familiarity with Lovecraft or his works are necessary in understanding this novel and ignorance may even be a help. There was one allusion, a beached giant squid, that seemed to have really no place in the book. Or maybe it is perfectly placed within the phantasmagoria. There are many aspect of The Broken Hours that don’t go very far, but I didn’t mind. It’s an enjoyable, creepy, seasonal read.