The Haunting of Hill House by Shirley Jackson

Four seekers have come to Hill House, a scary old abandoned mansion: Dr. Montague, an occult scholar who had been looking for an honestly haunted house all his life; Theodora, a lovely and lighthearted girl there mostly on a lark; Luke, the adventurous future heir of Hill House; and Eleanor, a strange and lonely woman well acquainted with poltergeists and other psychic phenomena. At first their stay seems destined to be merely a spooky encounter with inexplicable noises and slamming doors. But Hill House is gathering up powers and will soon choose one of them to make its own. (via Goodreads)

My Background with The Haunting of Hill House

The first time I read The Haunting of Hill House was in college, probably around twenty years ago. It was definitely during my freshman or sophomore year because I was living on the 5th floor of Pound Hall in a room across from the door to the stairwell. Since I was on the 5th floor, the number of people who used the stairs was nominal, but I could absolutely hear my fellow students coming and going. The room was also supposedly haunted. I’d hear the noise of a ball bouncing and once, as several of my friends were in my room for movie night, we heard knocking from inside my closet. We all noted it with a “well, that’s weird,” but none of us decided to investigate further.

I first heard about The Haunting of Hill House through Stephen King’s Danse Macabre. Happily, UNL’s library had a copy. I checked it out and settled in to read in spare moments. Which is how I ended up reading it one quiet night. And I was at the part where Eleanor and Theo are being terrorized in their room. Bang, Bang, BANG! And a group of my floormates emptied from the stairwell in a cacophony of feet on stairs and doors slamming. I nearly jumped out of my skin.

I’ve probably read The Haunting of Hill House three or four times since then. I’ve owned two copies. The last time I read it was with an eye on how Jackson creates tension with repetition and rhythm. This time I read it just to see what I could see. 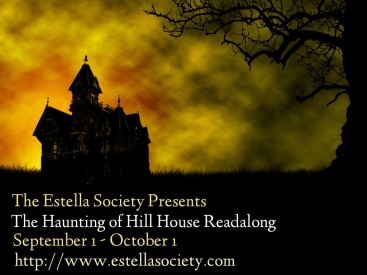 8 thoughts on “Reread Review ~ The Haunting of Hill House”