This book was provided to me by Quercus Publishing via Edelweiss. 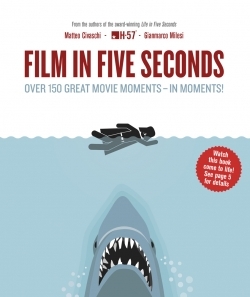 In today’s jet-fuelled, caffeine-charged, celebrity-a-minute world, who actually has the time to watch a film from start to finish? Let’s face it, life’s too short. Now, Film in Five Seconds lets you fast-forward to the best bits so you can enjoy all your favourite movie moments in – literally – moments.

Design studio H-57 have taken over 150 iconic films and cut away all the useless details, boiling them down into ingenious pictograms and creating hilarious visual snapshots that are witty, provocative and to the point.

From Batman to Bridget Jones, Grease to The Godfather, King Kong to The King’s Speech, via slapstick, sci-fi and superheroes, you’ll laugh out loud as you identify some of the greatest screen moments of all time. This is the perfect book for film buffs and anyone with a sense of humour or a short attention span. (via Goodreads)

Less a book to read and more a solo party game, Film in Five Seconds presents classic and popular current movies in the form of pictograms. Sometimes the pictogram shows plot, sometimes an iconic movie moment. The fun is obviously in trying to figure out what movie is being represented. After a few “easy” ones, I started to learn some of the pictogram vocabulary, but it might have been nice to have a minor “glossary” of what certain arrows and equal signs meant. On the whole, I think the short-attention-span pitch sells this book short (no pun intended, for once). These puzzles are quite clever, take more than five seconds to solve, and deserve more than five seconds of appreciation. This would be a fun gift for a film buff.

Publisher: Quercus Publishing Plc
Publication date: October 7th 2014
Genre: Er…
Why did I choose to read this book? Fun during a readathon.