This can’t be the last week of Nonfiction November. I haven’t read all the books yet!

I never quite managed to organize last week’s post on diversity in nonfiction magic literature (or rather the lack of it). Instead, I have a notion of spotlighting some women in magic every first Magic Monday of the month.

New to my Nonfiction TBR

New to My TBR: It’s been a month full of amazing nonfiction books! Which ones have made it onto your TBR? Be sure to link back to the original blogger who posted about that book! 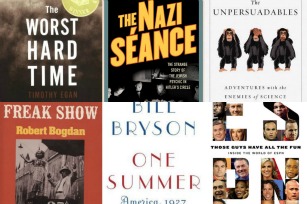 The Worst Hard Time: The Untold Story of Those Who Survived the Great American Dust Bowl by Timothy Egan – Growing up in Nebraska, I never had much of an interest in agriculture or the history of the Plains. That changed when I moved to Arizona. From The Relentless Reader

The Nazi Séance: The Strange Story of the Jewish Psychic in Hitler’s Circle by Arthur J. Magida – I tend to think that the heyday of spiritualism was past by WWII. Not so? From James Reads Books
(Also, when adding this to my Goodreads “Want to Read,” I came across The Rabbi and the Hit Man: A True Tale of Murder, Passion, and Shattered Faith by the same author. Doesn’t *that* sound interesting?)

The Unpersuadables: Adventures with the Enemies of Science by Will Storr – A book I wanted to read enough that I checked it out from the library during week two. From Bibliophilopolis

Again, despite growing up in Nebraska, I didn’t really become a sports fan until I moved away. I’m still picky about what/who I follow, but I am intrigued by sports nonfiction. Sarah at Sarah’s Book Shelves has a whole list of sports recs!

One Summer: America, 1927 by Bill Bryson – I spend time wondering what it would be like to live in the past. What day-to-day life was like. I have a feeling after One Summer, I’ll be reading more Bill Bryson. From Reading, Writing, Working, Playing (A shout out to Stainless Steel Droppings too, who happened to review this book last week.)

Unfortunately, the link-up this week is probably only going to further expand my TBR list. It already has with Those Guys Have All The Fun: Inside The World Of ESPN by James Andrew Miller and Tom Shales. From Musings From A Bookmammal