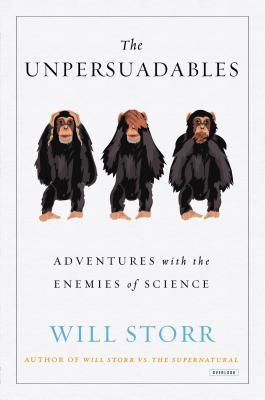 The Unpersuadables: Adventures with the Enemies of Science by Will Storr

While excavating fossils in the tropics of Australia with a celebrity creationist, Will Storr asked himself a simple question. Why don’t facts work? Why, that is, did the obviously intelligent man beside him sincerely believe in Adam and Eve, the Garden of Eden and a six-thousand-year-old Earth, in spite of the evidence against them?

It was the start of a journey that would lead Storr all over the world—from Texas to Warsaw to the Outer Hebrides—meeting an extraordinary cast of modern heretics whom he tries his best to understand. Storr tours Holocaust sites with famed denier David Irving and a band of neo-Nazis, experiences his own murder during “past life regression” hypnosis, discusses the looming One World Government an iconic climate skeptic, and investigates the tragic life and death of a woman who believed her parents were high priests in a baby-eating cult.

Using a unique mix of highly personal memoir, investigative journalism, and the latest research from neuroscience and experimental psychology, Storr reveals how the stories we tell ourselves about the world invisibly shape our beliefs, and how the neurological “hero maker” inside us all can so easily lead to self-deception, toxic partisanship and science denial. (via Goodreads)

With the subtitle Adventures with the Enemies of Science, I expected something a little different from The Unpersuadables. Something harder and something more neutral. Or, maybe with my own biases, something more skeptical, even though I had been warned.

Will Storr is a seeker. The Unpersuadables is his record of trying to reconcile his nagging feeling of wrongness amid his skepticism. While investigating the followers of some more eccentric beliefs, Storr feels some measure of kinship. He finds it difficult to judge them when he himself has done pretty irrational things. What can be learned from Holocaust deniers, sufferer of Morgellons syndrome, and even the King of Skeptics?

Well, Storr learns that the human brain is incredibly fallible. Even on a basic level, the world we sense is somewhat inferred by the information we already have. On a higher level, we have all developed models of how we believe the world to work and are loath to deviate from them. Our memories are incredibly malleable, which is unfortunate since we rely on the stories we tell ourselves for our sense of being. Storr’s conclusion seems to be that all in all, human’s are not set up to be rational.

To frame this with my own story, I’ve been thinking about the pitfalls of narrative ever since I read Jenette Fulda’s book Chocolate and Vicodin back in early 2012. One morning, Fulda woke up with a terrible headache that would not go away and could not be diagnosed. By the end of her memoir, she still has the headache and I had a feeling of dissatisfaction. I realized, after some thought, that my unease had been caused by a lack of ending in her narrative. And this is something that sufferers of chronic conditions deal with all the time. “Get well soon!” is always the wish. In other words, “Please, end your narrative happily.” Unfortunately, people don’t get the chronic part of the equation.

The scientific method is not narrative friendly. “Conclusions” are always being overturned in light of more data. People want a tight, definite answer. Science is actually, surprisingly often not about those.

“The scientific method is the tool that humans have developed to break the dominion of the narrative. It has been designed specifically to dissolve anecdote, to strip out emotion and leave unpolluted data,” Storr’s writes. “But we can hardly be surprised if some feel an instinctive hostility to it, for it is fundamentally inhuman.”

For me, science is about creating systems. I find a great satisfaction and even joy in cohesive systems. Stories still have their place. I’m a writer; obviously I believe that. But narratives and science can be parsed. I also believe that we can attempt to overcome some of these human deficits, though it takes a certain amount of vigilance to continually question ingrained models. I was surprised by Storr’s hostility toward the skeptic movement, but on the other hand, skeptics aren’t immune to the same biases and failures.

A word about the science: The Unpersuadables was originally published in early 2013, which means the neuroscience theories presented are older than that. Given the pace at which theories are being formed and reformed in this field, the science isn’t “latest,” it’s old. Just sayin’.

On the writing front, The Unpersuadables is a good reminder of what thought processes go into belief. Handy when writing characters that have different beliefs from my own.