“The Man Who Fought Roland LaStarza” by Joyce Carol Oates 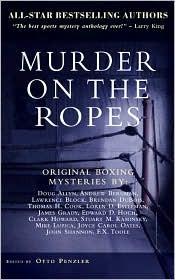 From: Murder on the Ropes edited by Otto Penzler – An anthology of boxing mysteries.

Thoughts: Deal Me In serendipity came into play for my first pick of the year, giving me a narrator who is thinking about events in her childhood after the death of her father on New Year’s Day 2000.

Back in the 1950s, when our unnamed narrator was just a girl, her parents were great friends of Colum Donagh, a light heavyweight boxer and local hero in Yewville, New York. Colum is known in the community as the Man Who Fought Roland LaStarza, but also the Man Who Took His Own Life. Colum mysteriously commits suicide at age 31 not long after fighting LaStarza.

To our narrator, Colum’s death is one of the many mysteries of childhood. The actions of adults were to her, and to most children, impenetrable. On one hand, Colum was often jovial, though mercurial, with an optimistic zest for life. He often unwisely boxed with all offense, leaving little for defense because he simply believed he *would* win. On the other hand, Colum had a theory that there exists a place where people know how their lives will play out, including the date of their death. While his friends find the concept morbid, Colum believes it would allow one to live life with all the proper embellishment.

So the mystery is, did this man, bright and vibrant (Oates repeatedly describes him as a flame), but maybe on the downside of his career, really kill himself?

Told in first person perspective by an unnamed narrator, I went back and forth on whether the narrator was male or female. I tend to default to giving first person narration the same gender as the writer, in this case female. I started out that way, second-guessed myself for a while, and then was given firm confirmation late in the story when her father takes her along to see Colum fight LaStarza. The female narrator gives the story an interesting feel. Not only is Colum a good friend of the family, but our narrator also might have the slightest crush on him, which makes her utterly unwilling to see any wrong in him or her father.

Joyce Carol Oates does a wonderful job with the main fight against Roland LaStarza. There are a few paragraphs that I want to pick apart to study how she writes action. I’m not terribly familiar with boxing, so FMI, Roland LaStarza is a real person. He was the boxer to come closest to beating the undefeated Rocky Marciano.

About the Author: Joyce Carol Oates is an author I wouldn’t have associated with boxing. To me she’s one of those supremely *literary* authors who can get away with writing genre too. I read her very unsettling “The Hand Puppet” just a few months ago in one of the Copperfield anthologies. But boxing? Maybe she’s just a name that Murder on the Ropes commissioned for the anthology? Nope. Oates has authored a collection of essays on the sport after taking an interest in it. It’s going on my reading wishlist.