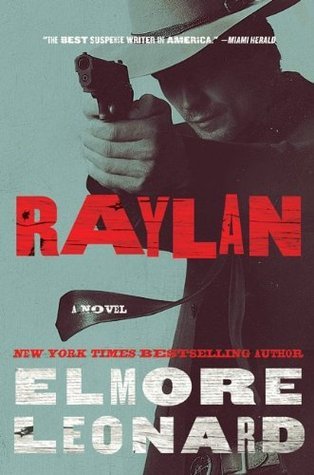 With the closing of the Harlan County, Kentucky, coal mines, marijuana has become the biggest cash crop in the state. A hundred pounds of it can gross $300,000, but that’s chump change compared to the quarter million a human body can get you—especially when it’s sold off piece by piece.

So when Dickie and Coover Crowe, dope-dealing brothers known for sampling their own supply, decide to branch out into the body business, it’s up to U.S. Marshal Raylan Givens to stop them. But Raylan isn’t your average marshal; he’s the laconic, Stetson-wearing, fast-drawing lawman who juggles dozens of cases at a time and always shoots to kill. (via Goodreads)

If you follow Justified, you recognize some plot points from the series in that blurb, but context is different. Elmore Leonard wrote Raylan between the second and third seasons of the series (kinda-sorta). A Salon article from January 2013 explains the situation better than I can, but I like this quote by executive producer and developer Graham Yost:

I am a fan of Justified. After the second season, I actually stopped watching for a while because I feared the decline that often happens to good shows. I finally watched seasons 3-5 in December and I’m happy to report that the quality does not flag. Justified does something that very few TV shows get right: balancing long term plot threads with the satisfying single episode experience. And without gimmicks; instead relying on interesting characters. That said, Raylan Givens is not my favorite of those characters, and I was hoping for more of the background characters to have bigger roles.

Raylan deals with three plot threads: three villains, all of them female, all very money-hungry. Their portrayals are not flattering, but then, Leonard’s male characters aren’t angels either. Mainly, the stories seemed a little one note to me. This is a problem I’ve had with most of Leonard’s non-Westerns. I wonder if there’s something about a the modern setting that leaches some nuance from his characters.

One note: I bought the Kindle edition of this book. While the Kindle Cloud version was formatted fine, the device version really sucked. For a while I thought Leonard was being particularly jarring with his scene transitions, but then I realized that I was missing line breaks on my Kindle.

Publishing info, my copy: William Morrow, 2012, Kindle/Epub edition
Acquired: Purchased ebook from Amazon
Genre: Crime
Previously: I’ve read one Elmore Leonard novel in the past (a western, Gunsights) and a couple of anthologies. I’m generally happier with his Westerns. Therefore, I haven’t read the other two novels with Raylan Givens as a character, but I did read the short story “Fire in the Hole” from When the Women Come Out to Dance. That short story was the basis for Justified‘s pilot.

One thought on “Review ~ Raylan”