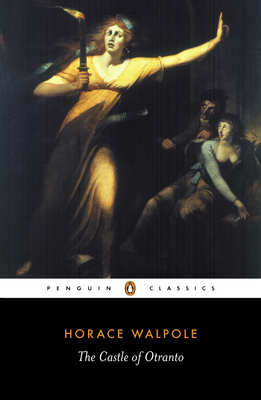 The Castle of Otranto by Horace Walpole

On the day of his wedding, Conrad, heir to the house of Otranto, is killed in mysterious circumstances. Fearing the end of his dynasty, his father, Manfred, determines to marry Conrad’s betrothed, Isabella, until a series of supernatural events stands in his way. . . .

Set in the time of the crusades, The Castle of Otranto established the Gothic as a literary form in England. With its compelling blend of psychological realism and supernatural terror, guilty secrets and unlawful desires, it has influenced a literary tradition stretching from Ann Radcliffe and Bram Stoker to Daphne Du Maurier and Stephen King. (via Goodreads)

Goodreads blurbs are interesting. Sometimes spoilery, sometimes off-base. For example, in the case of The Castle of Otranto, I would not stick the label of “psychological realism” on it. Granted, published in 1764 near the beginning of the novel as a literary form, Otranto has characters who are at least meant to be characters rather than pawns of allegory and satire. But psychologically accurate? Not so much.

One of the first, great Gothic novels, and one of the most influential books in literary history, this thrilling tale abounds in adventure, suspense, and supernatural occurrences. In a realm where a villain reigns, mysterious events aid in fulfilling a prophecy that spells doom for the ruler and justice for the rightful heir.

One of the most influential books in literary history? I think there’s a strong argument for *that*. Gothic fiction became the flip-side to Romanticism. Instead of bucolic scenery and love, peace and harmony, gothic novels are full of dark forests, brooding castles, and lustful, scheming villains. But that comes later. For Walpole, this seems to be his reaction to the picaresque and epistolary novels that existed. Wikipedia notes that Walpole was admittedly influenced by Shakespeare. I can see this mashup of moral, travel-based adventure literature and the darker, supernatural aspects of Shakespeare.

Stylistically, The Castle of Otranto sets up so many tropes of gothic fiction. The castle and abbey with secret tunnels. The sinister landscape surrounding Castle Otranto. The lecherous villain and the imperiled women. Secret lineages. Walpole even sets up the narrative within a narrative, claiming that the tale of Castle Otranto is a translation of an Italian manuscript from the 1200s which is in fact a story from the 1000s. I don’t know if Walpole is the first to do this, but it’s certainly a reoccurring aspect of gothic fiction.

Story-wise? Well, it was published in 1764. It alternates between a bit zany and a bit dry.  Honestly, even though it was 100 pages long, it felt like it should have been half that. There are some genuinely creepy bits set amid some eye-rolling dialogue. And some of the twists? It could be argued (and probably is somewhere) that the modern soap opera is based on gothic literature.

Publishing info, my copy: Public Domain Kindle edition, transcribed from the 1901 Cassell and Company edition
Acquired: Amazon
Genre: Gothic!
Previously: This is the first Walpole I read that I know of. Obviously, not the first Gothic fiction.

Recently, I made a statement that Eleanor, in Shirley Jackson’s The Haunting of Hill House, *wishes* she were in a gothic novel, but isn’t. I’ll stick to that considering that Hill House has many gothic aspects (the house, the tale of Hugh Crain and his progeny), but follows a different path. The Seance by John Harwood is more gothic than I realized when I tagged it as such. Lastly, I’m going to revisit, in the near future, Steven Wedel’s article “Horror’s Hearth and Home: The Use of Setting in American Gothic Fiction”.