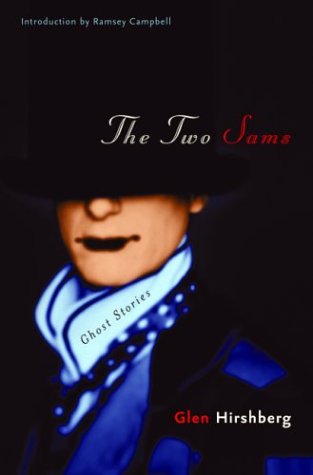 The Two Sams by Glen Hirshberg

In the title story of this unique collection a husband struggles with the grief and confusion of losing two children, and forms an odd bond with the infant spectrals that visit him in the night. “Dancing Men” depicts one of the creepiest rites of passage in recent memory, when a boy visits his deranged grandfather in the New Mexico desert. In “Mr. Dark’s Carnival,” a college professor confronts his own dark places in the form of a mysterious haunted house steeped in the folklore of grisly badlands justice. “Struwwelpeter” introduces us to a brilliant, treacherous adolescent whose violent tendencies and reckless mischief reach a sinister pinnacle as Halloween descends on a rundown, Pacific Northwest fishing village. Tormented by his guilty conscience, a young man plumbs the depths of atonement as he and his favorite cousin commune with the almighty Hawaiian surf in “Shipwreck Beach.” With The Two Sams author Glen Hirshberg uses his remarkable gift for capturing mood and atmosphere to suggest the possibility that the most troubling ghosts of all are not the ones that hover above us and walk through walls, but those that linger in our memories and haunt our souls. (via Goodreads)

I reread The Two Sams back in December. I get into a horror mood in the winter; it never fails. At the time, I think there was a reason behind the pick, but I don’t remember it now. Maybe I just needed something that I knew would be good.

I was reminded again of how well Hirshberg handles a sense of place in all of these stories. Even the two that I don’t like as much, “Shipwreck Beach” and “Dancing Men,” I can’t deny that I am there in those stories. “The Two Sams” still stood up as being creepy and poignant. And I had forgotten how much of a set up there is to “Mr. Dark’s Carnival” and its Twilight Zone ending. These are all solid, solid stories.

But I actually do have a ghost of a memory about why I decided to read The Two Sams and it had to do with the story “Struwwelpeter.” The original Der Struwwelpeter is a children’s book by Heinrich Hoffmann. In the book, “Shockheaded Peter” is a boy who won’t comb his hair or cut his nails and is therefore shunned. All the children in the book misbehave and suffer for it. Some in rather gruesome ways. Yes, it’s *that* kind of children’s book. The Peter of Hirshberg’s “Struwwelpeter” is a bad kid too. In a way the story is a companion to his novel The Snowman’s Children. Set in the late 70s, The Snowman’s Children relies on the biggest child-related issue of that time: abductions. In “Struwwelpeter,” we have school violence, the bugaboo of the 2000s. In retrospect, the one problem I have with this story is that I’m not sure I buy Peter as a truly disturbed kid, even though the story works in the moment.