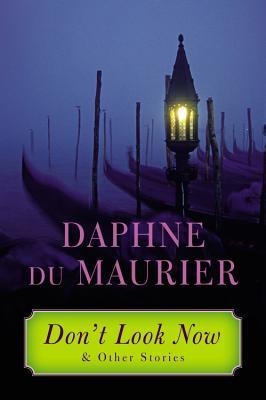 A married couple on holiday in Venice are caught up in a sinister series of events. (via Goodreads)

I am super glad that A.) I have a fairly bad memory and B.) I’m incredibly tolerant of spoilers. Electric Lit’s comment on this story and its literary monster completely gives away the twist.

Earlier this month, I finished du Maurier’s classic novel Rebecca. It was, to my recollection, the first of her works that I’d read. Honestly, I wasn’t that impressed with the story, but I had an inkling that I might like her other works. She definitely has a flair for setting and atmosphere which go a long way with me. As my reading plans would have it, I had two du Maurier stories on my slate: “The Birds” (a Lunar extra selection) and “Don’t Look Now” from the Obscure Literary Monster’s list. Since I was eager to follow-up, I picked “Don’t Look Now” as part of my Readathon festivities. (*And* Jay had just read it from his Deal Me In list, which also whetted my appetite.)

John and Laura are a couple on holiday in Venice. They have recently suffered a loss; their young daughter Christine died of meningitis, and John desperately wants everything to go back to normal. The vacation really isn’t working until they encounter a strange set of twins. The twins are older ladies, one of them blind and reportedly a psychic. Laura is comforted by the blind twin “seeing” Christine happy. John, a skeptic, is not a fan of the sisters. For him, their message is more dire: he has some psychic ability himself, and he and Laura should leave Venice immediately. If only people in Twilight Zone-esque stories would heed the blind psychic… Since I didn’t remember the spoiler at all, I had no idea exactly how this story was going to end, but I figured there would be more to it than Laura leaving Venice to tend to their ailing son.

Great story and I’m looking forward to “The Birds”.

Not a great week word-count wise. I had some VOTS web stuff get in my way on Weds/Thurs as well as 24-hour Readathon and VOTS league finals yesterday. I *did* print out the last bunch of scenes to picked them apart and edit them by hand. Sometimes that’s the best way of doing things for me. Fairly happy with where I am at the moment. I’m not going to get to 30K by the end of April, but maybe 20K. Finished or not, I’m going to hand In Need of Luck over to Eric on Friday for a read-through.

“The Problem of Leon” by John Shannon

From: Murder on the Ropes, edited by Otto Penzler

Leon wasn’t stupid, but he was ineffably unpleasant and tiresome and permanently aggrieved…

Jack Liffey met Leon Krane when they were both in college. Jack would like to believe that there isn’t true evil in the world, that maybe with a little understanding everyone can be a better person. He tries to befriend Leon, but Leon is pretty insufferable. Leon, once a math major, goes on to be a mildly successful boxer, a real tough guy who expects the same from his children. The problem? His youngest son is missing and he wants Jack, now a PI, to help find him. Except, Leon has only become a worse person in the intervening years, attested to by his wife’s black eye. When Jack finds Leon’s youngest, how *will* he manage to reconcile the two?

“The Problem of Leon” is light on plot, but heavy with characterization. Leon is a pretty well-drawn character, even if the reader still doesn’t quite understand what makes him tick.

About the Author: John Shannon is best known for his series of novels featuring the character of Jack Liffey. This is my first brush with both the character and the author. This story provides a bit of Liffey prequel, set mostly during his college days.

Best of My Reading Year

I haven’t finished a lot of books this year, so I’m including short stories as well.

Best YA Book of Your Reading Year: Fangirl by Rainbow Rowell. I don’t read many YA novels, but when I do, they’re set where I was a young adult.

Best Non-Fiction Book of Your Reading Year: Dead Wake by Erik Larson. My review of it didn’t do justice to how much I liked it.

Best Sci-Fi Book (story) of Your Reading Year: “Cat Pictures Please” by Naomi Kritzer. And you can read it too! http://clarkesworldmagazine.com/kritzer_01_15/

Reading: “Hyman the Magnificent” by Steve Stern
Drinking/Eating: Considering coffee, but maybe a nice cup of tea.
Notes: Back from frisbee league finals. My team won two games and lost the third shortened game. I’m body tired, but there’s more readathon to do!

END_OF_DOCUMENT_TOKEN_TO_BE_REPLACED

Once again, playoffs and finals for my ultimate frisbee league are the same weekend as Dewey’s Readathon. Two of my favorite activities, both on the same day! This season, at least, games don’t start until 4pm. Readathon start time for me is 5am, so I figure I can get 10-ish hours of reading in before the tournament.

For my reading “stack,” I think I’m going read a bit of Tim Prasil’s Help for the Haunted (maybe even finish it!) and catch up on some short works: