Magic in Theory: An Introduction to the Theoretical and Psychological Elements of Conjuring by by Peter Lamont & Richard Wiseman 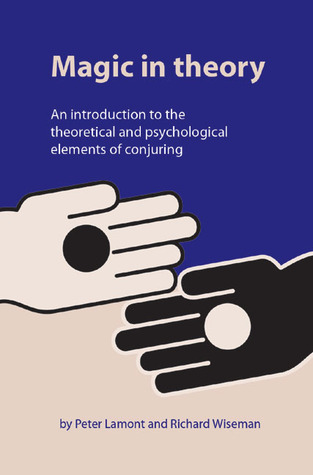 A useful manual for any magician or curious spectator who wonders why the tricks seem so real, this guide examines the psychological aspects of a magician’s work. Exploring the ways in which human psychology plays into the methods of conjuring rather than focusing on the individual tricks alone, this explanation of the general principles of magic includes chapters on the use of misdirection, sleight of hand, and reconstruction, provides a better understanding of this ancient art, and offers a section on psychics that warns of their deceptive magic skills. (via Goodreads)

A while back I reviewed Sleights of Mind, in which two neuroscientists take a look at what magic and magicians can teach science about how our brains work. In Magic in Theory, two psychologists provide a broader but more organized look at how many of the tried and true techniques in magic have some basis in psychology.

This book is the first attempt to draw together these different theoretical approaches and present them in a way that is accessible to a non-technical readership.

And non-technical means that it’s actually very light on the psychology and it can be read by non-magicians. There are no exposures, per se, but instead definitions of the broad categories of magic and the very basics of how a magician might go about performing those illusions. If you’re new to magic, this book would seem to provide a good introduction, and if you’ve been in magic for a while, I imagine that this is a nice refresher. Included is an extensive bibliography and a chapter on how pseudo-psychics (their term) differ in their methods from magicians.

Lamont and Wiseman know their stuff and aren’t afraid to reference their fellow magicians. I have Peter Lamont’s The Rise of the Indian Rope Trick on my shelf and the rest of his catalog on my wishlist. Richard Wiseman currently has two popular YouTube channels: Quirkology and In59Seconds.

I finished Rebecca! It only took me a month… This week, I’ll be reading Who is Magic Babe Ning? by Ning Cai, with intent to review it next Monday. I’m also starting Tim Prasil’s Help for the Haunted. Another Russian author is on tap for Deal Me in with “Electrification” by Mikhail Zoshchenko.