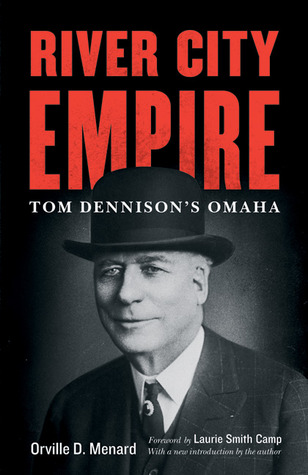 More than any other political boss of the early twentieth century, Thomas Dennison, “the Rogue who ruled Omaha,” was a master of the devious. Unlike his contemporaries outside the Midwest, he took no political office and was never convicted of a crime during his thirty-year reign. He was a man who managed saloons but never cared for alcohol; who may have incited the Omaha Race Riot of 1919 but claimed he never harmed a soul; who stood aside while powerful men did his bidding. His power came not from coercion or nobility but from delegation and subterfuge.

Orville D. Menard chronicles Dennison’s life in River City Empire, beginning with Dennison’s experiences in Colorado mining towns. In 1892 Dennison came to Omaha, Nebraska, where he married and started a family while solidifying his position as an influential political boss. Menard explores machine politics in Omaha as well as the man behind this machine, describing how Dennison steered elections, served the legitimate and illegitimate business communities, and administered justice boss-style to control crime and corruption. The microcosm of Omaha provides an opportunity for readers to explore bossism in a smaller environment and sheds light on the early twentieth-century American political climate as a whole. (via Goodreads)

Of the mixture of Omaha history and magic history that I’ve delved into in the last couple years, Tom Dennison might be the oldest ingredient from a research standpoint. According to Evernote (which is probably more or less accurate for this tidbit of information), I first bookmarked Omaha’s entry at AmericanMafia.com back in September 2012. I had done a search on the Mafia and Omaha and had been surprised to find any thing at all. But that is because I didn’t know my history.

At one time, “nice” Omaha, Nebraska was known as an “open” city. Its fast growth in the mid- to late- 1800s allowed for all sorts of vices to flourish, and for organized crime to move in and take advantage. Tom Dennison was a force in Omaha from the early 1900s until the mid-1930s. As the blurb says, he never held office and he was never convicted despite being the head of a political machine that allowed gambling, bootlegging, and prostitution to thrive. That isn’t to say that crime went unchecked in Omaha. It was actually quite well controlled, to benefit Dennison, of course.

River City Empire is an incredibly information dense book and well-researched. Menard tries to hit every facet of political bossism at play. Unfortunately, the organization isn’t intuitive. After a few biographical chapters, Menard tackles individual topics in a sort of chronological manner which leads to jumping back and forth through the timeline. I sort of feel like I need to reread this book to get things properly sorted in my head. It was a very interesting read, but not an easy or fast one.