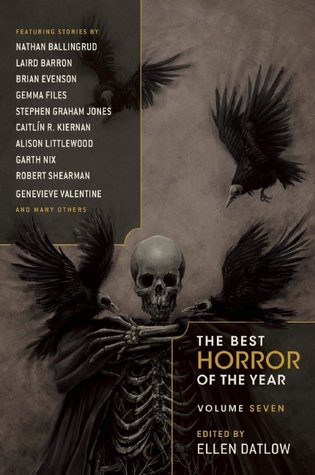 For over three decades, Ellen Datlow has been at the center of horror. Bringing you the most frightening and terrifying stories, Datlow always has her finger on the pulse of what horror readers crave. Now, with the seventh volume of this series, Datlow is back again to bring you the stories that will keep you up at night.

With each passing year, science, technology, and the march of time shine light into the craggy corners of the universe, making the fears of an earlier generation seem quaint. But this “light” creates its own shadows. The Best Horror of the Year chronicles these shifting shadows. It is a catalog of terror, fear, and unpleasantness, as articulated by today’s most challenging and exciting writers.
(via Goodreads)

In The Best Horror of the Year, Volume Seven, Ellen Datlow once again skims the cream to introduce fickle readers like me to some of the shining stars of the horror lit world. There are twenty-two stories in this collection, two less than last year’s volume though I don’t remember so many longer works included in Volume Six. Not quite half are by female authors.

There seemed to me to be several board categories of stories:

For example, quite a few serial killers as narrators with Angela Slater’s “Winter Children,” Gemma File’s “This is Not For You” (which includes the conceit of a murderous virago cult), “Interstate Love Song (Murder Ballad No. 8)” by Caitlin Kiernan, and my personal favorite of the group “Wingless Beasts” by Lucy Taylor for desert gross-out factor. (Hadn’t realized that this group contained so many female authors…)

A couple of stories involved crime with law enforcement or detective involved. “The Atlas of Hell” by Nathan Ballingrud features an occult investigator named Jack Oleander, whose further adventures I would happily read. Rio Youers’ “Outside Heavenly” had a lot of True Crime feel to it, though with a much more supernatural conclusion.

I’m always a sucker for horror comedy and I got a kick out of Stephen Graham Jones’ “Chapter Six,” which asks the question, what would a pair of academic rivals do after the zombie apocalypse?

There were also a bunch of cosmic horror/forbidden knowledge tales. “Allochton” by Livia Llewellyn provides a semi answer to my question about the intersection of domestic and cosmic horror as a company wife is wooed by strange qualities in the geography around her. Laird Barron’s “The Worms Crawl In” also takes us out into the forest to meet doom.

Rhoads Brazos’s “Tred Upon the Brittle Shell” and John Langan’s “Ymir” both pull from ancient mythologies and both involve physical decent as well, although Dale Bailey’s “The Culvert” doesn’t go as deep into the earth, but leaves us as lost in a shifting labyrinth.

Two stories that I really enjoyed involved a more historical touch. “A Dweller in Amenty” by Genevieve Valentine involves the ins and outs of a sin eater and Keris McDonald takes us back to academia as a museum worker learns about Innocent Coats in “The Coat Off His Back.”

One last stand-out: “Depertures” by Carole Johnstone, creepy and gory and set in an airplane terminal. It excellently combines the mundane with the uncanny.

4 thoughts on “Review ~ The Best Horror of the Year, Volume Seven”