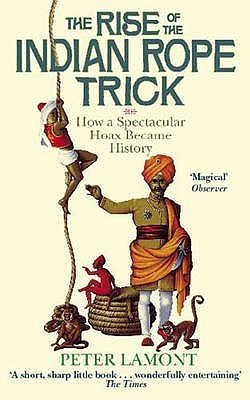 The Rise Of The Indian Rope Trick: How A Spectacular Hoax Became History by Peter Lamont

We assume that the Indian rope trick is a piece of ancient Hindu magic. But think again: it is actually the product of a hoax which appeared in the Chicago Tribune in 1890. This wonderfully researched, playfully written book takes us on a journey through Victorian society where we discover the interest in magic of Charles Dickens; Alfred Russell Wallace; Edward, Prince of Wales; Lord Northbrook and Charles Darwin. We learn how in an age of reason the British came to love all things Oriental and how the legend of the rope trick came to be perpetuated throughout the 20th century as fanatical public figures and aristocrats went to India in search of it and returned claiming to have seen it being performed. This is a charming history book filled with colourful characters, known and unknown, all of whom pursued an obsession. Some were respected members of society, some were incredibly eccentric and utterly deluded. It is set against the background of Victorian society and shows how the writing of history itself can perpetuate myths and legends. (via Goodreads)

The Indian Rope Trick: A fakir throws a rope into the air. Or maybe chain, or maybe a simply a ball of twine. Or maybe he entices the rope skyward through the use of music played on a flute. A young boy climbs the rope, maybe willingly or maybe after an argument with the fakir, and disappears. After a while, the boy reappears and climbs back down the rope. Or reappears in a basket on the ground. Or maybe, the fakir shouts for him and, when the boy doesn’t return, the angered fakir draws his scimitar and climbs the rope himself. After bloodcurdling screams, the dismembered limbs of the boy are thrown to the ground, to be reassembled and resurrected by the fakir after returning to earth. All this is done in the open air.

This is a legendary trick. Literally, it is a trick based mostly in legend. What is considered an ancient magic of India is barely more than 125 years old, the product of Orientalism and a “hoax” article that went the equivalent of viral for the late 1800s/early 1900s. While the original Tribune story was widely syndicated, the correction was not. When the trick was refuted by some of the best skeptics and magicians of the time, many travelers to the Mystic East recalled actually seeing the trick performed. Unfortunately, memory is terrible to rely on for actually remembering things and many of the witnesses were “remembering” an event that happened in the far past. Lamont notes that the above story became more fanciful the further in the past the reminiscence.

The Rise of the Indian Rope Trick is also a book about history and how writing about history and using other works about history can be misleading. Part of the problem with the rope trick is that historians in the 1800s weren’t necessarily using primary sources when writing about India. Their point of view was skewed by writers who wished India to be seen either as a place full of superstitious natives (that Imperialism could save) or a place full of wondrous miracles (that could save the Empire from the downer of science).

Lamont is probably the second funniest non-fiction writer I’ve read, after Mary Roach, but I wish Rope Trick had been a little more intuitively organized. There was a bit of repetition that I think could have been avoided by going at it chronologically. Also, despite the blurb, this book is about the trick, not really about the personalities. Still, a solid read and I’ll be on the lookout for Lamont’s other books.