This book was provided to me by Open Road Media via NetGalley in exchange for an honest review. 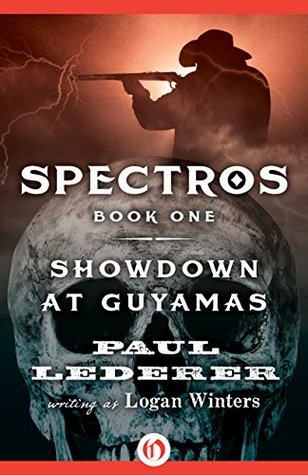 Showdown at Guyamas by Paul Lederer

In the thrilling first installment in this genre-busting series, Spectros journeys to Mexican mining country to confront the conjurer who kidnapped his bride.

A narrow carriage rumbles through the treacherous mountains of Sonora. Inside, surrounded by countless books and pieces of scientific equipment, rides Dr. Spectros—the most brilliant magician of the Old West. For years, he has pursued the fiendish sorcerer Blackschuster, who long ago stole the only woman the doctor ever loved. Spectros has now chased his nemesis to Mexico, where he discovers a town just as rotten as the conjurer who hides there.

Blackschuster has come in search of the silver he requires to keep the bride of Spectros trapped in eternal sleep. With the help of his associates, the gunslinger Ray Featherskill, the knife expert Inkada, and the hulking bruiser Montak, Spectros corners his enemy, but defeating him will take a magic more powerful than any the world has ever seen. (via Goodreads)

According to Goodreads, Showdown at Guyamas is a mere 138 pages long. It probably needs to be twice that. Lederer does a great job with setting (almost too good since we’re given an “establishing shot” for each scene) and writes very clear action scenes. I was never confused about where I was or what was going on. We have chases, showdowns, and knife-fights; all of which are handled wonderfully. It was the characters that were lacking for me.

I understand that some stories should be about the events, the plot, but in the case of this supernatural Western, character *reputation* is important. Minor characters recognize Kid Soledad and know his reputation, but as a reader, I really didn’t. Why not take time to establish the myth of Kid Soledad with tales being told by other characters? Maybe some of these tales are so fantastical that they can’t be true, but they are because Spectros/Soledad is a sorcerer. Likewise, Blackschuster and local bad guy Tomlinson get a few evil villain soliloquies, but we never see any of their evil deeds. I was never particularly invested in the character of Elisabeth because I was only told about her predicament. As for Doctor Spectros’ gang? This is the first novel in the series; I would have loved more of an origin story about each of these three odd-balls. I also didn’t have a good handle on Spectros’ magic. When adding fantasy elements, rules are important.

As far as series go, this one wrapped up its story while providing enough of a hook for the next book. That’s something I appreciate in any series. The plot itself is a little melodramatic, but I was okay with that. I just wish that the characters had been written with more detail.

Publishing info, my copy: Kindle version. Despite its Dec. 2014 pub date, I hope the version I downloaded was not the final version. There were a surprising number of typos and it felt like the formatting could have handled changes of POV better.
Acquired: NetGalley
Genre: Supernatural Western