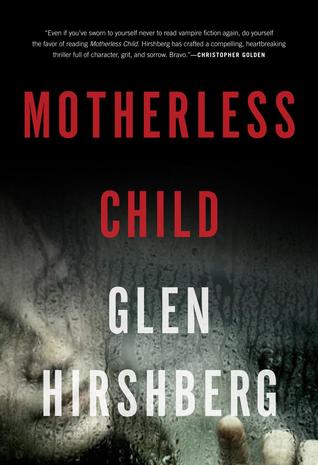 How about a vampire novel about single motherhood? And Otis Redding? And best friends? And how choose whom you kill? And what that costs? And whether there’s ever a way back?

On a rare night out in Charlotte, North Carolina, Natalie and Sophie—best friends, single moms, music lovers—meet the Whistler at the Back Way Out. In the aftermath of that encounter, desperate to save their children and, just maybe, themselves, they flee together down the back roads of the Deep South, pursued by guilt, the Whistler and his Mother, and their own growing, terrible hunger. (via Goodreads)

I became a fan of Glen Hirshberg when I read “The Muldoon” in People of the Book, an anthology of Jewish speculative fiction. While I’ve tried to become a completist, the majority of Hirshberg’s publication credits are from small presses and in limited editions. Motherless Child, for example,  was originally released by Earthling Publications in 2012 in a limited edition. I’m a poor writer and “limited edition” is code for “pricey.” Having read a pretty good survey of vampire fiction over the years, I was really interested in what Hirshberg might do with the concept, but had resigned myself to never having the opportunity. I was pretty freaking happy when Tor Books reissued Motherless Child last year.

This novel feels a little different than anything else I’ve read by Hirshberg. The main POV character is female (as are most of the main characters), and that might have changed the tone. There isn’t quite that sense of lurking dread that I’ve generally associated with Hirshberg, but that’s okay. The centerpiece of Motherless Child is the friendship between Natalie and Sophie. They are best friends, but there is a tension at the heart of their relationship that might come from knowing someone so well neither party takes the other entirely seriously. It’s also a novel about mothers and their children, a theme what comes up particularly at the end of the book.

Motherless Child does offer a new slant on vampires, which is an increasingly rare thing. It was published in the post-Twilight era, and Hirshberg’s vampires are beautiful and seductive (whether they want to be or not), but also terrible. One of the really uncomfortable aspects of the story is the Whistler, who sees Natalie as his Destiny. (His capitalization, not mine.) This goes beyond love or obsession, right into item ownership.

Make no mistake, this is a horror novel. There is gore. There are shocks. The last two chapters especially left me pretty gob-smacked. The ending works; Hirshberg doesn’t pull any punches. Which I absolutely love. It’s not entirely evident, but this is part of a planned trilogy to be published by Tor. Good Girls comes out in February.