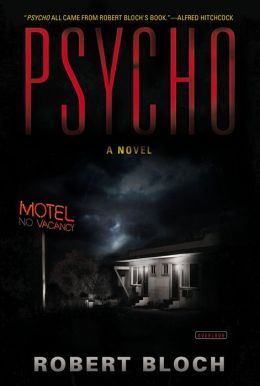 Norman Bates loves his Mother. She has been dead for the past twenty years, or so people think. Norman knows better though. He has lived with Mother ever since leaving the hospital in the old house up on the hill above the Bates motel. One night Norman spies on a beautiful woman that checks into the hotel as she undresses. Norman can’t help but spy on her. Mother is there though. She is there to protect Norman from his filthy thoughts. She is there to protect him with her butcher knife. (via Goodreads)

Norman is 40-something years old. He’s overweight, has bad eyesight, and an interest in the works of Aleister Crowley and P. D. Ouspensky. He’s a bachelor who lives with his mother and owns the Bates Motel. Mary Crane, on the run after stealing $40,000 from her employer, finds Norman to be odd. He fixes sandwiches for her, but becomes loudly angry when she suggests that maybe his mother would be better off in a hospital. To calm down after his meal with Mary, Norman has a few drinks. Unfortunately, Mother has other plans.

If you know the movie, you know there are a few differences between the above and the more popular version of the story. The skeleton of the story is the same, but I have to say, the screenplay is a much tighter, more effective way of telling the story.

This is a reread for me and this time I was looking at whether Robert Bloch’s Psycho had the marks of Gothic fiction. It has some of the elements of Gothic: the house (which is less prominent in the book), the family secrets, the insane relative kept away from the public, but it really only sidles up to Gothic. It instead takes a bit of a detour into  the post-modern pursuit of psychology. Still, maybe that’s what Gothic is in the 20th century…