I will be honest: I might be attempting #15in31—reading 15 books in the 31 days of October—but I’m going to be choosing some short works. My reviews? Maybe as short.

A multiple exposure picture (by photographer Dickenson Alley) of Tesla sitting in his laboratory in 1899.

My Inventions by Nikola Tesla ~ Nikola Tesla is one of the most famous and most innovative inventors of the 19th and 20th centuries. A lot has been written about him (one of my favorite books of 2014 was Bernard W. Carlson’s biography), but I hadn’t realized that Tesla himself had written about his life. My Inventions is a collection of articles that were originally published in Electrical Experimenter magazine in 1919 when Tesla was 63 years old.

Tesla is actually pretty readable. Well, at least I thought so, but I *am* used to the company of engineers. These articles were also much more about the inventing than the inventions. Tesla does think very highly of himself, obviously with good reason most of the time, but somewhat incongruously at other times. For example, knowing how wildly over-budget some of his later projects were, I’m skeptical of his claim that he was able to perfectly design an apparatus in his head, without the need for testing.

My Inventions by Nikola Tesla is available online for free!

Left: An older Joseffy with Balsamo, the Talking Skull.
Right: An illustration from the book – Joseffy performing a not entirely accurate Rising Card trick.

The Marvelous Creations of Joseffy by David P. Abbott ~ I got in the mood to read Tesla because I was in the mood to read about Joseffy. Joseph Freud, known by the stage name Joseffy, was a magician and mechanician in the early 20th century. He too was an inventor, not on the level of Tesla, but with a number of patent to his name outside of being a wonder-worker on stage. Published in 1908, The Marvelous Creations of Joseffy is a short treatise on the magician’s signature tricks written by David P. Abbott. It’s an outlier in the world of magic books. It describes the tricks without exposing them. (Most magic books of the era, written by magicians, did explain the methods behind tricks. Fellow magicians have to learn their craft somehow!)  Additionally, the book is illustrated with photographs, but they are slight exaggerations of the actual tricks and sometimes don’t really match Abbott’s descriptions. It’ss a level of misdirection which can probably only be appreciated by magicians.

This is a reread for me. Abbott is the subject of my fiction and Joseffy is probably going to make an appearance one of these days. Joseffy was a bit of a mad scientist and I’m sad that he’s relatively unknown outside of magic history circles. As I noted on Twitter, after reading about Tesla and Joseffy all weekend going back to a book about Houdini seemed rather bland. The Marvelous Creations of Joseffy is also in the public domain, but the version I read is part of House of Mystery, the complete works of David P. Abbott, collected and commented on by Teller and Todd Karr. 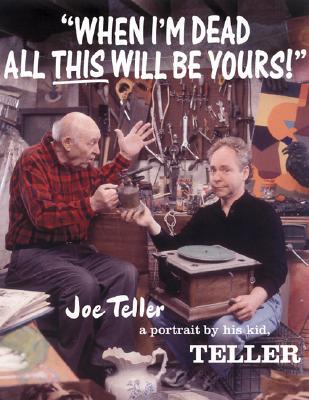 When I’m Dead All This Will Be Yours! by Teller ~ Speaking of Teller, half of the magic duo Penn & Teller…

If it weren’t for Eric, I wouldn’t own this book. Never a browser, Eric took a seat in the humor section at A Novel Idea bookstore in Lincoln, NE to wait while I shopped. I’ve been mostly scouring bookstore for books on magic and Nebraska history. “Nothing,” I stated, ready to leave. “There’s a book by Teller,” he said, pointing. “Where?!” I said, blind.

Of course this book was in the humor section. It isn’t about magic at all. At least not *that* kind of magic. Instead, it’s a quiet and funny little memoir about Teller and his parents. At the age of 50-ish, Teller learns that his father, an artist, tried his hand at cartooning in his younger days. This discovery leads him through his parent’s boxes of art and letters from the 1920s, 30s and 40s before he was born. It’s a charming little book that I was happy to snag. And I didn’t realize it when I bought it, but my copy is signed!