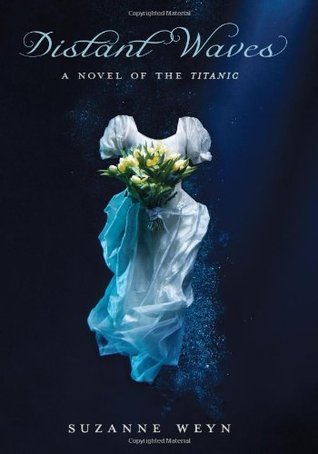 From the author of REINCARNATION, another historical, supernatural romance, this time focusing on five sisters whose lives are intertwined with the sinking of the Titanic.

Science, spiritualism, history, and romance intertwine in Suzanne Weyn’s newest novel. Four sisters and their mother make their way from a spiritualist town in New York to London, becoming acquainted with journalist W. T. Stead, scientist Nikola Tesla, and industrialist John Jacob Astor. When they all find themselves on the Titanic, one of Tesla’s inventions dooms them…and one could save them. (via Goodreads)

And Arthur Conan Doyle and Houdini are in this book too! Obviously, it pokes many of my historical fandom buttons.

In Distant Waves, history is stretched and twisted back on itself so that many of the events and relationships converge on 1912. There are a lot of inaccuracies, some of which Weyn addresses at the end of the book. To some extent this should be read as more of an alternative history rather than a historical fiction. There are certainly a few speculative touches that pull it away from realistic fiction.

It was a readable book, fairly well-paced despite a pretty long lead-up to the Titanic. It was great for the readathon and I read it cover to cover last Saturday.

I’m not quite sure what I think of Weyn’s Tesla. Not surprisingly to me, the main character Jane, a fan of Sherlock Holmes, takes a liking to the eccentric scientist, who manages to rescue them during his man-made New York earthquake.  We’re treated to a lot of “creative genius picked on by capitalism” stories. In regards to spiritualism, Weyn leaves things ambiguous and that’s a good line to take in this book.

There was one plot point that I kind of rolled my eyes at, even in the midst of all the other stretches. In this case, it was more of a concrete problem solved by overly lucky circumstances that could have been dealt with, I think, in a less complicated manner. (I know this pitfall well; it’s one I often fall victim to.)