This book was provided to me by Henery Press via NetGalley.

The Miser’s Dream by John Gaspard 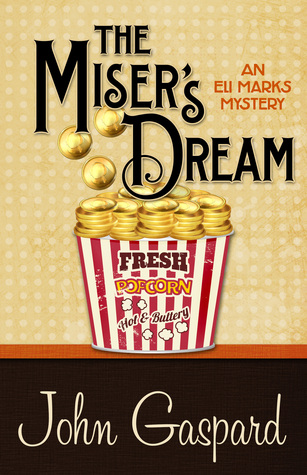 A casual glance out his apartment window turns Magician Eli Marks’ life upside down. After spotting a dead body in the projection booth of the movie theater next door, Eli is pulled into the hunt for the killer. As he attempts to puzzle out a solution to this classic locked room mystery, he must deal with a crisis of a more personal nature: the appearance of a rival magician who threatens not only Eli’s faith in himself as a performer, but his relationship with his girlfriend.

But the killer won’t wait and starts taking homicidal steps to bring Eli’s investigation to a quick and decisive end. Things get even worse when his magician rival offers his own plausible solution to the mystery. With all the oddball suspects gathered together, Eli must unveil the secrets to this movie-geek whodunit or find himself at the wrong end of the trick. (via Goodreads)

I’m slightly neurotic when it comes to series of and sequels to things I really enjoy. While I’m excited for more, I’m always apprehensive that the next might be bad and sully the rest. I once waited three years before watching season three of Justified because season two was so good…

This is John Gaspard’s 3rd Eli Marks mystery and, so, I was worried. As I read, all the elements that I enjoy were present:

But at the half way point, I thought I’d solved the mystery. And I was a little disappointed. Wonderfully though, John Gaspard exposes that red herring in a particularly funny and theatrical way by the end of the book. There was a different detail toward the end that I rolled my eyes at, but it’s minor and I’d had such a good time that I’m willing to let it go. And, neurotic or not, I look forward to the next Eli Marks mystery.

My favorite version of The Miser’s Dream, or, Money from Nothing:

2 thoughts on “Review ~ The Miser’s Dream”