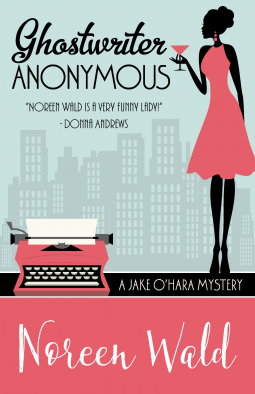 With her books sporting other people’s names, ghostwriter Jake O’Hara works behind the scenes. But she never expected a séance at a New York apartment to be part of her job. Jake had signed on as a ghostwriter, secretly writing for a grande dame of mystery fiction whose talent died before she did. The author’s East Side residence was impressive. But her entourage—from a Mrs. Danvers-like housekeeper to a lurking hypnotherapist—was creepy.

Still, it was all in a day’s work, until a killer started going after ghostwriters, and Jake suspected she was chillingly close to the culprit. Attending a séance and asking the dead for spiritual help was one option. Some brilliant sleuthing was another-before Jake’s next deadline turns out to be her own funeral.
(via NetGalley)

I’ve been sampling cozy mysteries. With seances mentioned in the blurb and ‘ghostwriter’ in the title, I was intrigued by Ghostwriter Anonymous.

Via Goodreads, I learned that this book was first published in 1999, and I think that maybe Ghostwriter Anonymous was shooting for a Sex in the City vibe. Jake has a circle of somewhat eclectic, fashionable friends, and all the men are attracted to her. Most of the scenes seem to take place over drinks-at-lunch or over drink-at-a-club. To recuse myself, that type of thing may not be Sex in the City at all. While I am of the generation that watched that show, it never appealed to me and I’ve never watched an episode.

One aspect of this book that didn’t work for me was the amount of status checks and name dropping that passed as description. Not people names, but street names, business names, and brand names. I suppose if one knows more about these places and things, they would imply a certain amount of detail. For me, personally? Not so much.

Also in very 1999 style, when emails are used to send threats, the details of how emails might be traced or sent anonymously are really muddled. Yes, a person can send an email from a computer at Kinko’s, but they wouldn’t be using Kinko’s account.  Another reality check fail was when a character is hit by a car, enough to send her flying a few feet and bruise her up. She manages the rest of the book on a few Tylenol.

The mystery itself is resolved, more or less, though it’s nearly lost in a muddle of seances and hypnotism and some other strange body-part focused psychotherapy.

Unfortunately, something I’m learning about cozies is that there are many different types and, some of them, I’m probably not going to like. It’s sort of like ice cream. I like ice cream, but not really ice creams flavored like bubblegum or cotton candy. Had I known this was going to be bubblegum flavored ice cream, I wouldn’t have tried it.