Heirs of Grace by Tim Pratt 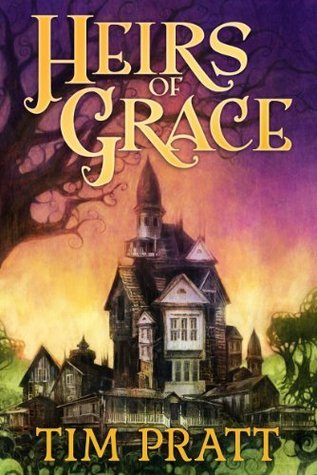 Recent art school graduate Bekah thought she’d hit the jackpot: an unknown relative died, and she inherited a small fortune and a huge house in the mountains of North Carolina.

Trey Howard, the lawyer who handled the estate, is a handsome man in his twenties and they hit it off right away-and soon become more than friends. Bekah expected a pleasant year to get her head together and have a romantic fling. Problem is, the house is full of junk…and siblings she didn’t know she had are willing to kill her for it.

More important, the junk in her new house is magical, she’s surrounded by monsters, and her life seems to be in mortal peril every time she ventures into a new room. As Bekah discovers more about her mysterious benefactor and the magical world he inhabited, she’s realizes that as tough and resourceful as she is, she might just be in over her head…

Heirs of Grace is a tale of family and magic, action and wonder, blending the strong heroine, cheeky humor, and dark fantasy that have become the hallmarks of Tim Pratt’s writing. (via Goodreads)

It had been over five years since I read Tim Pratt’s Hart & Boot & Other Stories when I noticed the Heirs of Grace ad on my Kindle. I don’t buy a lot of ebooks, but I like to support writers I like and, with a creepy house as its centerpiece, I figured I couldn’t go very far wrong.

Mostly, I was right. Pratt’s fantasy infused reality  is fun and also appropriately scary. Even some of the “good guys” in Heirs of Grace were unsettling. The romance aspect was at a level I like: there, but not the main point of the story.  The novel was originally released by Amazon as a five-part serial, and the structure works well. Bekah meets challenges in bite-sized pieces that do ramp up to an…interesting…ending.

(Also, there’s a nice little nod to another Rebecca–the road to Grace House is lined with rhododendrons.)

The one thing that really bugged me was, well, Bekah. I know she’s supposed to be strong and, as a woman of color, probably has reasons to be on her guard, but the chip on her shoulder was huuuge. Everyone she meets is judged and found wanting. Thinking poorly of others just isn’t a quality I like in my main characters. Despite that, I did like that Bekah is smart and level-headed. For example:

A lot of romantic comedies annoy me because three-quarters of the time, the star-crossed lovers could uncross their stars if they only sit down and actually talk to each other instead of sitting around being pissed off about some misunderstanding.

Weird? Shapeshifters, magic eaters, fish gods, and titans. Not to mention the bellowing thing in the woods…

4 thoughts on “Review ~ Heirs of Grace”