We Have Always Lived in the Castle by Shirley Jackson 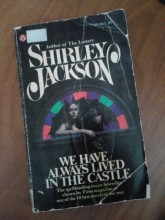 Merricat Blackwood lives on the family estate with her sister Constance and her Uncle Julian. Not long ago there were seven Blackwoods—until a fatal dose of arsenic found its way into the sugar bowl one terrible night. Acquitted of the murders, Constance has returned home, where Merricat protects her from the curiosity and hostility of the villagers. Their days pass in happy isolation until cousin Charles appears. Only Merricat can see the danger, and she must act swiftly to keep Constance from his grasp. (via Goodreads)

I’ve been meaning to reread We Have Always Lived in the Castle for quite a while now. I first read it in 2003, probably the second Shirley Jackson novel I’d ever read after The Haunting of Hill House. Since then, I’ve read most of her other novels. There is a definite progression in their clarity and focus. Castle is the last she wrote and it is the most distilled in terms of story and tone. I got into a discussion on Reddit and as a fellow redditor put it, “If there’s one author I could go back in time and tack another decade onto her life to see what she’d write it’s Shirley Jackson…”

I realized though, at about the halfway mark, that I had munged the plot of The Sundial (which I read three years later in 2006) into Castle, probably due to both having inter-family murders and imposing houses. The Sundial kind of meanders as a novel, while Castle is clear in its purpose.

Mostly, I wanted to reread Castle to look at it in the context of Gothic literature. There is indeed a “castle” at the heart of the book (Blackwood House), and a young woman, and family secrets, but if we’re to place the story into the Gothic mold, it’s Charles who is the character who comes into the situation from outside. He is a poor substitute for the usual Gothic heroine. He’s not interested in his cousins’ secrets, only their money. If Eleanor in Hill House wants to be in a Gothic novel, Castle is a Gothic novel already in progress and Constance and Merricat are unperturbed by their places within it until Charles (the not-Gothic world) intrudes. 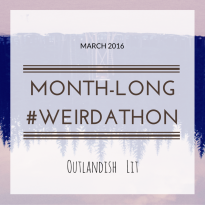 At the end of Castle, the Blackwoods have been ousted from their Gothic story, but placed into what is maybe the 20th century equivalent: the urban (rural New England?) legend.

Was it weird? Well, there are no cosmic monsters. No frogmen. No gods on earth. Can two sisters, one of them a murderer, living in an old house with their uncle, surviving on their garden and a belief in magic be weird?

Publishing info, my copy: mass market paperback, Popular Library, 1962
Acquired: Sometime before April 2003. My copy has a $1.00 price tag on it, which might be what I payed for it. It also has stamps for Sembach Junior High Resource Center and Vogelweh Library Exchange, both located in Ramstein-Miesenbach, Germany.
Genre: horror

4 thoughts on “Review ~ We Have Always Lived in the Castle”