This book was provided to me by Grove Atlantic and Mysterious Press via NetGalley in exchange for an honest review. 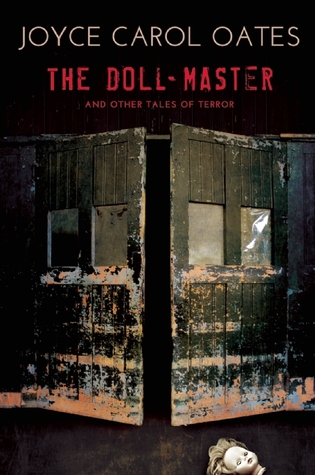 From one of our most important contemporary writers, The Doll-Master and Other Tales of Terror is a bold, haunting collection of six stories.

In the title story, a young boy becomes obsessed with his cousin’s doll after she tragically passes away from leukemia. As he grows older, he begins to collect “found dolls” from the surrounding neighborhoods and stores his treasures in the abandoned carriage house on his family’s estate. But just what kind of dolls are they? In “Gun Accident,” a teenage girl is thrilled when her favorite teacher asks her to house-sit, even on short notice. But when an intruder forces his way into the house while the girl is there, the fate of more than one life is changed forever. In “Equatorial,” set in the exotic Galapagos, an affluent American wife experiences disorienting assaults upon her sense of who her charismatic husband really is, and what his plans may be for her.

In The Doll-Master and Other Tales of Terror, Joyce Carol Oates evokes the “fascination of the abomination” that is at the core of the most profound, the most unsettling, and the most memorable of dark mystery fiction. (via Goodreads)

In the past when I’ve read Joyce Carol Oates’ stories, I’ve wanted to make the grand proclamation that her works straddle the line between genre (the horror genre in particular) and literary, except that’s never entirely true. Genres rely on certain conventions and tropes. When Oates is at her best, she entirely sidesteps genre and instead gives readers discomfiting tales just a askew of reality. Most of the stories in this collection are, alas, much more straightforward.

“The Doll-Master,” “Big Momma,” and “Mystery, Inc.” are all fairly by-the-book stories. More genre than usual from Oates. The trapping are well done. “The Doll-Master” and “Big Momma” have a high creep factor. I wondered briefly if the stories lived on the same fictional block since both deal with missing children.”Mystery, Inc.” is a nice little jaunt into murder and book buying, but I think I would have enjoyed it more at the beginning of the collection. By the end, I was a little worn down with the grimness of the other stories. None of these three tales provided any sort of surprise. In fact, the endings felt telegraphed.

“Gun Accident” has a little more ambiguity to it, but it pales in comparison to one of Oates’ most famous stories “Where Are You Going, Where Have You Been?”. Both tread some of the same ground: a teen-aged girl in a house alone is visited by an older man. But these two stories are the ambiguity flip-sides of each other. “Where Are You Going…” is completely about tension and only approaches what the outcome of the situation might be. “Gun Accident” has no tension and is about the aftermath of the situation after it’s played out in our view. “Where Are You Going…” is the better story.

I’ll be honest, I didn’t make it through “Equatorial.” I was about 40 pages in and I had about 40 pages to go, but I really didn’t care what the situation was between paranoid Audrey and philandering Henry Wheeling.

“Soldier” is the best of the collection. The story deals with race and gun violence and what narrative are teased from the scaffolding of White Man Shoots Black Man while staying in the shooter’s point of view. It is not a comfortable story.

This collection might have suffered from my own expectations. The last few stories of Oates that I’ve read before it have been among her best. The Doll-Master isn’t her best, but most of the stories are still pretty good.