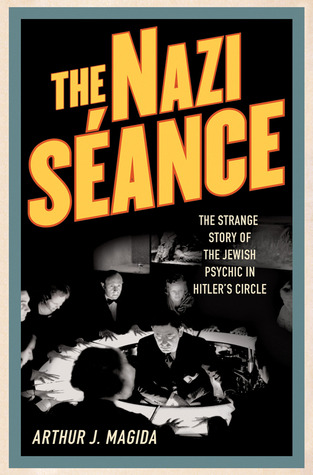 World War I left Berlin, and all of Germany, devastated. Charlatans and demagogues eagerly exploited the desperate crowds. Fascination with the occult was everywhere – in private séances, personalized psychic readings, communions with the dead – as people struggled to escape the grim reality of their lives. In the early 1930s, the most famous mentalist in the German capital was Erik Jan Hanussen, a Jewish mind reader originally from Vienna who became so popular in Berlin that he rubbed elbows with high ranking Nazis, became close with top Storm Troopers, and even advised Hitler.

Called “Europe’s Greatest Oracle Since Nostradamus,” Hanussen assumed he could manipulate some of the more incendiary personalities of his time just as he had manipulated his fans. He turned his occult newspaper in Berlin into a Nazi propaganda paper, personally assured Hitler that the stars were aligned in his favor, and predicted the infamous Reichstag Fire that would solidify the Nazis’ grip on Germany. (via Goodreads)

Before the era of television and movies, magicians had to engage in a certain amount of myth-making. The magician was selling the story of himself before an audience ever saw him pull a rabbit out of his hat. When Arthur J. Magida examined some of the stories Erik Jan Hanussen wrote in Meine Lebenslinie, an account of Hanussen’s early years, Magida wasn’t surprised that there were few corroborating details. The tale of how Hermann Steinschneider became Erik Jan Hanussen is full of exaggeration with Hermann always cast as the hero. This is the backdrop that must be kept in mind with Hanussen. If the rumor was that Hanussen was the personal advisor to Hilter, why would he refute that?

Magida does a good job sifting through the rumors and the exaggerations. Hanussen played a very dangerous game, being a Jew with ties to the Nazi party. He was obviously a very talented psychic, using a combination of cold reading, muscle reading, and his own intuitions. Unfortunately, he let fame and ego blind him to the danger he was in after Hitler became chancellor.

This books is also an interesting look at the rise of the Third Reich. What I know about WWII is based around the Holocaust. That’s an important narrative, but I think remembrance needs to stretch back to how it came about. Hanussen wasn’t a pure, naive victim of the Nazis, but he was an entertainer who loved Berlin. It was his home; it was were he wanted to stay and he was willing to jockey for good position no matter what the cost.

And I really can’t mention Hanussen without a shout-out to  Neil Tobin’s “interactive biographical comedy-drama” Palace of the Occult. Check out the trailer!

4 thoughts on “Review ~ The Nazi Seance”