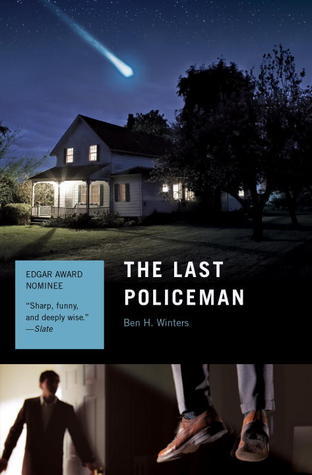 What’s the point in solving murders if we’re all going to die soon, anyway?

Detective Hank Palace has faced this question ever since asteroid 2011GV1 hovered into view. There’s no chance left. No hope. Just six precious months until impact.

The Last Policeman presents a fascinating portrait of a pre-apocalyptic United States. The economy spirals downward while crops rot in the fields. Churches and synagogues are packed. People all over the world are walking off the job—but not Hank Palace. He’s investigating a death by hanging in a city that sees a dozen suicides every week—except this one feels suspicious, and Palace is the only cop who cares. (via Goodreads)

The Last Policeman isn’t the sort of book I’d usually read. I’m not really a fan of apocalyptic novels, pre- or post-, for my own reasons. But I won a signed copy of the second book from Geeky Library and pretty much every blogger I respect has liked the series. I purchased the first of the trilogy when it came on sale. It only took me a year and a half to get around to reading it!

You know what? I liked The Last Policeman too. I have a soft spot for characters like Hank Palace: characters who like their job, do their job, and do it well. Often, they’re on the wrong end of the circumstance stick, as in the case of Hank. It’s tough to revel in being made detective after a short time on the force when the world is going to end in six months.

I suppose some of the appeal of this trilogy might come from wondering, “What would I do with six months left?” Of course, the problem is *everyone* only has six months. The goods and services that society is used to are becoming scarce. What usually trips me up in post-apocalyptic stories is the amount of chaos that the author decides is appropriate (usually too much, in my opinion). Does Winters do a good job with societal breakdown? Eh, I’m not thinking too hard about it. The better aspect of the setting is the New England noir anyway.

I’ll be reading Countdown City in the near future.