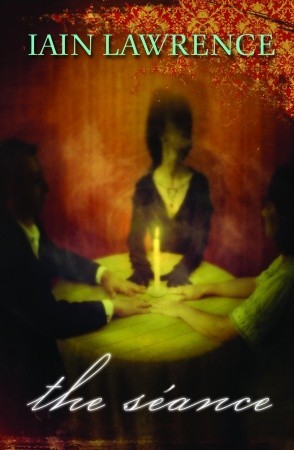 The Seance by Iain Lawrence

SCOOTER KING UNDERSTANDS illusions. In the midst of the Roaring Twenties, he performs them behind the scenes at his mother’s séances, giving the impression that Madam King communicates with the dead. Scooter also admires Harry Houdini and can hardly wait to see the famed magician escape from his razzle-dazzle Burmese Torture Tank. But when Scooter stumbles upon a dead body in the visiting Houdini’s tank, it’s no illusion. Who could the murderer be? And did he—or she—kill the right person?

As Scooter sets out to unmask the killer, the mysterious worlds of mediums, séances, and magic are revealed. No one is above suspicion, and appearances are deceiving. If Scooter doesn’t sort out the clues—and fast—he may end up as the next dead body. (via Goodreads)

The Séance is a murder mystery set in 1926 with a 13 year-old protagonist. I don’t read a lot of books with young protagonists (even when I was young) because I find it hard to believe in the proficiencies of young people. I remember being thirteen. I was pretty crap at most things. In this case though, Scooter is a boy of the 1920s who has been specifically trained with a certain set of skills. And it would have been nice if those skills would have been more intrinsic to his solving the mystery. Another problem I have with young protagonists is that they sort of require a lack of adults. In this case, there seems to be only one policeman investigating the inciting murder and he has no time for a kid’s testimony. All the other adults are pretty much buffoons, including Scooter’s mom. Houdini does make an appearance, here and there, and is a true-to-form glory hound.

I was attracted to this book due to my research into séances and I especially wanted to see how the author was going to treat the behind-the-scenes aspects. All-in-all, those details were handled fairly well. Scooter’s mother does partially believes that her psychic powers are real, but there’s nothing in the narrative that leads down a supernatural path. I was okay with Lawrence adding the fictitious spiky water tank, the Burmese Torture Tank, to Houdini’s repertoire when a unique murder weapon was needed, but there were some later details that were a little too convenient.