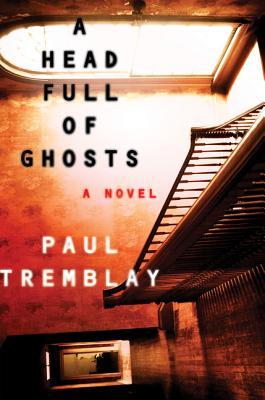 A Head Full of Ghosts by Paul Tremblay

The lives of the Barretts, a normal suburban New England family, are torn apart when fourteen-year-old Marjorie begins to display signs of acute schizophrenia.

To her parents’ despair, the doctors are unable to stop Marjorie’s descent into madness. As their stable home devolves into a house of horrors, they reluctantly turn to a local Catholic priest for help. Father Wanderly suggests an exorcism; he believes the vulnerable teenager is the victim of demonic possession. He also contacts a production company that is eager to document the Barretts’ plight. With John, Marjorie’s father, out of work for more than a year and the medical bills looming, the family agrees to be filmed, and soon find themselves the unwitting stars of The Possession, a hit reality television show. When events in the Barrett household explode in tragedy, the show and the shocking incidents it captures become the stuff of urban legend.

Fifteen years later, a bestselling writer interviews Marjorie’s younger sister, Merry. As she recalls those long ago events that took place when she was just eight years old, long-buried secrets and painful memories that clash with what was broadcast on television begin to surface–and a mind-bending tale of psychological horror is unleashed, raising vexing questions about memory and reality, science and religion, and the very nature of evil. (via Goodreads)

While I’d been hearing a lot about this book (it won the Stoker Award last year after all), it was the last part of the above summary, the “vexing questions about memory and reality,” that really got me interested in A Head Full of Ghosts. We place a great deal of importance on memory, but our brains are actually really terrible at remembering. And that’s before any questions about the subjective nature of perception. This is a ripe field for horror!

Unfortunately, there was an aspect of this book that was really distracting to me: what year did these events take place in? When I’m given a framing narrative that refers to events 15 years ago, I assume that the framing narrative is taking place in the year that the book was published; in this case, 2015.  Which means to me, unless I’m disabused of the notion, that the flashback narrative (and in this case the remembered narrative) happened in 2000-2001. But it obviously does not. There are too many smart phones, thin laptops, and a pope who didn’t become pope until 2013. Which means that the flashback narrative happened in 2015-ish and the framing narrative is set in 2029-2030. But that doesn’t quite make sense either. Considering that blogs are already being considered “retro” in light of platforms like Medium, I don’t think Karen’s blog is really going to be a thing in 2030.

Maybe it’s just me being OCD. For a while I thought that, yes, maybe Merry is simply misremembering things. Someone who grew up in a world where cell phones are common might default to “remembering” someone texting on their phone when (in 2001, in a family that is having money problems) that’s probably unlikely. But when hard facts show up and are included in the TV show recaps, I know it’s not just Merry’s memory.

A Head Full of Ghosts does nod to a few feminist issues. When fourteen-year-old  Marjorie knows fun facts about demons and exorcisms, the adult men around her can’t believe that a girl would know such things. This attitude brought to mind for me both the Fox sisters and the Cottingley fairies. In both cases, young girls were seen as too naive and ignorant to pull off a fraud. Similarly, to me the most chilling moment in the whole book happens during the (rather tame) exorcism. Marjorie begs to be let up and let go, but of course, she isn’t because at this point the men in power believe she doesn’t know her own mind. But there’s a difference between not knowing your own mind and someone else deciding they know it for you.

3 thoughts on “Review ~ A Head Full of Ghosts”