Card picked: Ten of Diamonds
From: I Am Legend, and other stories

Oh, Richard Matheson. You are the king of writing a whole story to support one line…

Chris Neal is an angry man. He’s a writer who has no time to write (despite a good four hours in the morning). His wife spends all his money (although she’s leaving him due to his anger issues). He is college English teacher, who will never be given tenure because the administration doesn’t like him (because he’s capricious toward his students). Most days, it feels to Chris that his every house is out to get him. In fact, on some days, it seems like Chris’s very house and belongings are out to get him. Rugs trip him. His shaving razor cut him. His typewriter maliciously sticks and pinches his fingers. A scientist at the university doesn’t think that this is such a crazy idea. He believes that Chris’s anger has infected everything around him.

Chris Neal is one of the more loathsome characters that I’ve met in a while. Thirty-four pages was much too long a time to spent with him. He deserves the end he gets:

And there we are, the finish of my third Deal Me In! Ending with a story about a failed 40-something writer is a little uncomfortable, but that’s 2016 for you. Time to go pick my first card for 2017!

This book was provided to me by University Press of Mississippi via NetGalley in exchange for an honest review. 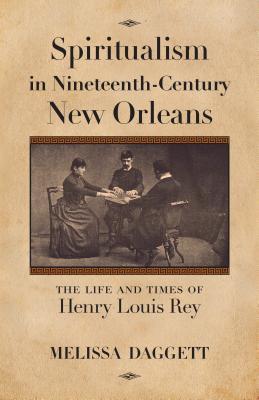 Spiritualism in Nineteenth-Century New Orleans: The Life and Times of Henry Louis Rey by Melissa Daggett

Modern American Spiritualism blossomed in the 1850s and continued as a viable faith into the 1870s. Because of its diversity and openness to new cultures and religions, New Orleans provided fertile ground to nurture Spiritualism, and many seance circles flourished in the Creole Faubourgs of Treme and Marigny as well as the American sector of the city. Melissa Daggett focuses on Le Cercle Harmonique, the francophone seance circle of Henry Louis Rey (1831 1894), a Creole of color who was a key civil rights activist, author, and Civil War and Reconstruction leader. His life has so far remained largely in the shadows of New Orleans history, partly due to a language barrier.

Spiritualism in Nineteenth-Century New Orleans focuses on the turbulent years between the late antebellum period and the end of Reconstruction. Translating and interpreting numerous primary sources and one of the only surviving registers of seance proceedings, Daggett has opened a window into a fascinating life as well as a period of tumult and change. She provides unparalleled insights into the history of the Creoles of color and renders a better understanding of New Orleans s complex history. (via Goodreads)

I was attracted to Spiritualism in Nineteenth-Century New Orleans because I hadn’t considered that there might be regional differences in how Spiritualism was approached. I had thought of the rise and popularity of Spiritualism in this era as a mostly homogeneous experience, with at most rural/urban differences. Of course, I was wrong.

At its beginnings, Spiritualism was regarded with suspicion in the Confederate South. It was seen as just another Yankee “-ism,” along with abolitionism and feminism. Spiritualism did notably take hold in the Creole community, especially among free men of color.  Beautifully, from a research point of view, these séance circles kept detailed logs of their sittings. Though written in French, the logs of Henry Louis Rey survived to present day and offer a wonderful primary source. The spirit guides were often important personages  to the community, lost during the war, and their hopeful messages often reinforced the political issues of the day.

Melissa Daggett grounds her look at Spiritualism in the life of Rey and the history of New Orleans. That is this book’s strength, but also its weakness. Occasionally, I felt bogged down in the general history of the era. Additionally, while based on an incredible primary source, no translations of the log were extensively quoted. That seems to me to be a missed opportunity.

I started the year on what I called a sabati-hiatus. I wanted to not worry about writing and maybe do a few other things instead. Mostly those other things were classes. I always enjoyed school. I started diving into online classes in late 2015 and continued in 2016.

END_OF_DOCUMENT_TOKEN_TO_BE_REPLACED 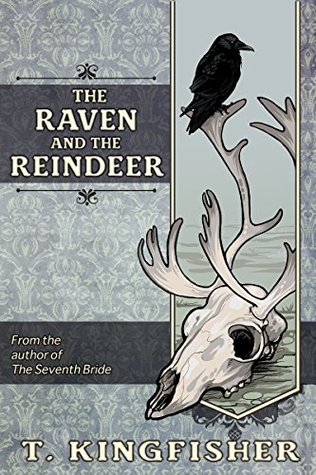 The Raven and the Reindeer by T. Kingfisher

When Gerta’s friend Kay is stolen away by the mysterious Snow Queen, it’s up to Gerta to find him. Her journey will take her through a dangerous land of snow and witchcraft, accompanied only by a bandit and a talking raven. Can she win her friend’s release, or will following her heart take her to unexpected places?

A strange, sly retelling of Hans Christian Andersen’s “Snow Queen,” by T. Kingfisher, author of “Bryony and Roses” and “The Seventh Bride.” (via Goodreads)

As T. Kingfisher (or, Ursula Vernon as she’s otherwise known) points out in her acknowledgements, Hans Christian Andersen “was a weird dude.” When a witch, a sarcastic raven, a magical reindeer skin, and a half dozen giant white otters are added in, you don’t notice so much. As in the shorter stories I’ve lately read by Vernon, I enjoy her humor and her mixing of myths and religions.

“Are you a witch?” asked Janna.

In modern life, we often have the family we’re born into and the family we choose. Often what is expected of us is deeply connected with that first kind of family. Greta is expected to become a weaver. She’s expected to marry the boy (literally) next door and expected to live ever after, even if not entirely happily. Kay’s kidnapping sets this plan on end. As Gerta fights to regain status quo, she finds a new type of family and new paths that aren’t expected.

With snow and reindeer and a Snow Queen, this was pretty much a perfect read for Christmas week. The beginning is maybe a little slow to start, but the plot is threaded together more tightly than I was expecting. The payoff for early misadventures is at the end.

I’ll probably finish one more book before the end of the year, but here’s where I stand on December 26th.

END_OF_DOCUMENT_TOKEN_TO_BE_REPLACED

In addition to the 52 stories in the Deal Me In challenge, I read 70+ other short stories throughout the year. Picking a top 10 was tough! In some cases, I rated a story high after reading it, but in retrospect I couldn’t remember much about it. Others, while lower rated, left a definite impression.

Here are my top 10, in no particular order:

From Deal Me In

“Pate de Foie Gras” by Isaac Asimov – I didn’t care for many of the stories in Asimov’s Mysteries, but this take on the goose that lays golden eggs is really fun. – Review

END_OF_DOCUMENT_TOKEN_TO_BE_REPLACED

“The Dying Night” by Isaac Asimov

Thoughts: I started the year with Asimov and nearly ended it with Asimov. This anthology has been a mixed bag, but it’s going out on a high note. “The Dying Night” is an honest mystery: all the clues are in place and an observant reader should be able to solve the mystery with a bit of effort. No zigger here, thank goodness.

As I mentioned earlier in the year, much of 1950s science fiction fares rather poorly when compared to 2010s technology.  In “The Dying Night,” we have human bases on the Moon, Mercury, and Ceres, but much of the mystery relies on scientists having scanner devices…that rely on film that needs to be developed. (Microcomputers are only the purview of statisticians.)

Despite the lack of tech forethought, the story is interesting for a 2016 reader in other ways (aside from being a decent mystery). Asimov highlights the differences between three astronomers, each of  whom has spent substantial time one of these bases. When visiting Earth, each complains about differences in gravity and sunlight, and the utter weirdness of walking around unprotected outside. These are things to think about if we’re considering long-term settlements off of Earth. But more intriguingly, Asimov’s signature character, Wendell Urth—preeminent extraterrologist—is an Earth-bound character. He doesn’t like to travel in any way that isn’t his own two feet. All his knowledge is collected second-hand. He is the epitome of the argument for remote exploration. Not romantic, but practical.