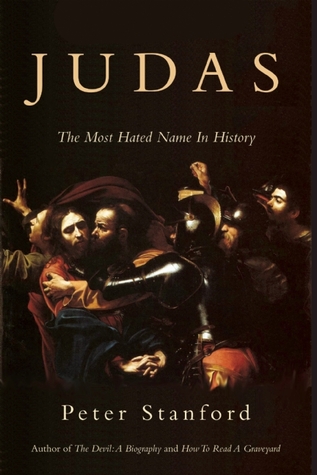 Judas: The Most Hated Name in History by Peter Stanford

In this fascinating historical and cultural biography, Peter Stanford deconstructs that most vilified of Bible characters: Judas Iscariot, who famously betrayed Jesus with a kiss. Beginning with the gospel accounts, Stanford explores two thousand years of cultural and theological history to investigate how the very name Judas came to be synonymous with betrayal and, ultimately, human evil. But as the author points out, there has long been a counter-current of thought that suggests that Judas might in fact have been victim of a terrible injustice: central to Jesus’ mission was his death and resurrection, and for there to have been a death, there had to be a betrayal. This thankless role fell to Judas; should we in fact be grateful to him for his role in the divine drama of salvation? “You’ll have to decide,” as Bob Dylan sang in the sixties, “Whether Judas Iscariot had God on his side.” An essential but doomed character in the Passion narrative, and thus the entire story of Christianity, Judas and the betrayal he symbolizes continue to play out in much larger cultural histories, speaking as he does to our deepest fears about friendship, betrayal, and the problem of evil. (via Goodreads)

Judas Iscariot is mentioned only 22 times in the gospels, which are in essence the four retellings of the life of Jesus Christ. Judas’s involvement within Christianity, though, is pretty important. He was paid to point out Jesus to agents of the Jewish High Priest Caiaphas who turns Christ over to the Romans who execute him. Because of this Judas’s name has become a cultural touchstone synonymous with betrayal and treason. Worse though, Judas isn’t just Judas. For a very long time, Judas has been Judas the Jew.

I was raised Lutheran. Not super conservative evangelical Lutheran, but as more of a tolerant, low-key, benevolent Lutheran. Honestly, until I went to public school in seventh grade, I didn’t realize that there were differences between  sects of Christians. A girl in my gym class took exception to my notion that she, a Catholic, and I were pretty much the same. Regardless, she seemed like a pretty nice person, smart, and a good volleyball player. Nearly 30 years later, I remain unconvinced that there is anything inherently virtuous,  or deplorable, about any particular religious affiliation.

The first book I read by Peter Stanford, a Catholic theologian, was The Devil: a Biography. In it, Stanford provides a look at the Devil using the Bible, but also other literature, visual arts, and a survey pop culture. He does much the same thing with Judas.

It’s through later writings and art, though, that Judas the betrayer becomes not just a scapegoat (if the entirety of Christianity depends on the death and resurrection of Christ, doesn’t *somebody* have to be the betrayer?), but the template used to condemn an entire religion. If Judas the Jew is a betrayer, isn’t every Jew treasonous? Judas becomes not just a history of Judas, but a history of antisemitism.

In my initial religious education, Judas wasn’t mentioned overly much. Sure, I knew about his involvement in the events of Good Friday. I knew that calling someone “Judas” was to call them a betrayer, although I think I’ve personally heard Benedict Arnold invoked more.  “Judas the Betrayer == Evil Jews” never occurred to me before reading this book.  That this could be a kernel upon which to grow antisemitic rhetoric is by turns confusing and appalling to me. On a slightly comforting note, Stanford points out that, for most people in the post-WWII world, that connotation is less prevalent than it has been since the gospels.