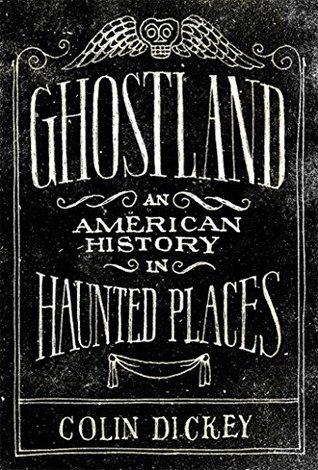 Ghostland: An American History in Haunted Places by Colin Dickey

Colin Dickey is on the trail of America’s ghosts. Crammed into old houses and hotels, abandoned prisons and empty hospitals, the spirits that linger continue to capture our collective imagination, but why? His own fascination piqued by a house hunt in Los Angeles that revealed derelict foreclosures and “zombie homes,” Dickey embarks on a journey across the continental United States to decode and unpack the American history repressed in our most famous haunted places. Some have established reputations as “the most haunted mansion in America,” or “the most haunted prison”; others, like the haunted Indian burial grounds in West Virginia, evoke memories from the past our collective nation tries to forget.

With boundless curiosity, Dickey conjures the dead by focusing on questions of the living—how do we, the living, deal with stories about ghosts, and how do we inhabit and move through spaces that have been deemed, for whatever reason, haunted? Paying attention not only to the true facts behind a ghost story, but also to the ways in which changes to those facts are made—and why those changes are made—Dickey paints a version of American history left out of the textbooks, one of things left undone, crimes left unsolved. (via Goodreads)

Why was I interested in this book?
I enjoy reading/hearing about hauntings. I was browsing through the library’s audio catalog and Ghostland had a good narrator.

What Worked
Like a lot of folklore, ghost stories are strongly tied to the history and culture of place. In Ghostland, Colin Dickey takes some of the most famous haunted places in the US, fact checks the story’s details (when applicable), and then takes a look at how the setting and history of the location has played a part in the narrative’s current form. There are differences between ghost stories in Athens, GA and Hollywood, CA after all.

Dickey also examines how modern society views ghosts. On one hand, there is a cachet to having a ghost “destination.” Many of the hauntings in Ghostland have been featured on ghost hunting TV shows. In many cases, like the Winchester Mystery house, not-quite-true stories continue because that is the narrative that sells. On the other hand, no one *really* wants to live somewhere they believe to be haunted, even if phenomena can be easily debunked. Ghost are good if you want a tourist trap, bad if you want to sell a house.

What Didn’t Work
The structure of Ghostland was roughly chronological, but also broken into specific types of locations—domestic places (houses), commercial places (bars, hotels), public works places (prisons, cemeteries, parks), and even cities themselves. I probably would have preferred a more strict chronological order.

This is also a popular nonfiction work, not a scholarly work. Some of the tenants of Ghostland aren’t exhaustively investigated. For example, it’s argued that the ghost stories of the American south edit out the horrors of slavery in favor of more romantic stories, like Myrtles Plantation’s Chloe. But a good investigation of such an assertion could take a book itself. Ghostland is a sip from the well instead of a deep dive.

Overall
Overall, thumbs up. It was good to listen to during my reading slump. If you’re a fan of podcasts such as Lore or Just a Story, this is definitely up your alley.