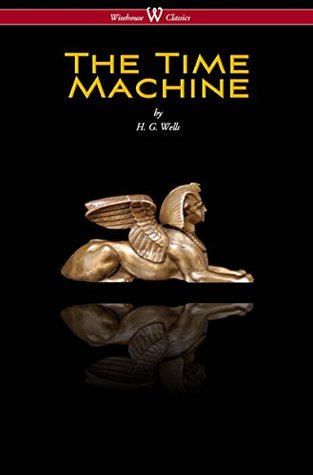 The Time Machine tells the story of the Time Traveler, an inventor living in Victorian England. Traveling into the distant future using his time machine he encounters the descendants of humans and witnesses the end of life on earth. Wells’ first published book, The Time Machine, popularized the concept of human time travel and has influenced countless works of fiction. (via Goodreads)

Why was I interested in this book?
After reading The War of the Worlds in December and Melville’s Moby-Dick in February, I’ve become intrigued by the amount science and natural history that is included in these 100+ year old novels and by the genre called scientific romance. (No, Moby-Dick doesn’t quite fit that genre, but it does include an enthusiasm for scientific fact that I feel is missing from a lot of modern literature, even modern science fiction.) So, there’s probably going to be quite a bit of Wells, Jules Verne, and Arthur Conan Doyle’s adventures in this blog in the near future.

I also have a guilty pleasure to admit to. Back at the beginning of March, ABC premiered Time After Time. It’s based Karl Alexander’s novel of the same name (and a subsequent 1979 movie). The premise? A young H. G. Wells pursues Jack the Ripper to the modern era and falls in love with Jane, a historian (in the TV series). The science in the show is terrible. Actually, much of the writing is pretty bad and occasionally cliched. But H. G. and Jane are so cute together.* It’s enough to melt even my cold unromantic heart. But if you haven’t watched, don’t invest your time; it’s already been cancelled.

* I’m guessing that the series wasn’t going to bring too much of the historical Wells into the story. His views on sex were, uh, progressive.

What Worked
I enjoy Wells’ writing style. He adeptly mixes science with his social and psychological views. The Time Machine is a fairly simple story. Our narrator tells of the Time Traveller and recounts the Traveller’s tale after he returns from journeying to the far future.

The Traveller’s first jump takes him to a future in which humanity has split into two species: the Eloi and the Morlocks. Both are the products of a society in which one class valued ease of life and the other class has been forced to be the laborers. Taken to the extreme, the Eloi no longer know how to do anything, while the Morlocks only thrive underground, taking care of the machinery that keeps both societies going. Since agriculture is no longer supported, the Eloi live on plants and the Morlocks…live on Eloi. In both cases, intellectualism has fallen by the wayside. The Traveller’s second jump takes him to the end of the world.

In both cases, the imagery Wells uses is unlike anything I’ve read. I’ve watched the 1960 film ages ago and I don’t remember it doing justice to the text in this regard. It’s far enough into the future to be alien. And, while the novel (novella) might have spawned an entire science fiction genre, it doesn’t deal with the usual time travel paradox problems.

What Didn’t Work
It was way too short. I was reading an ebook version released in conjunction with Felix Palma’s The Map of Time. The last half of the file was a preview of that book! Curse you, ebooks!

Also, I part of my brain cries out, “But Katherine, didn’t you just complain about three guys creating a world-altering technology basically in their basement. Isn’t Wells doing the same thing here?” And, well, yes. Perhaps the Victorian scientific romance is the basis for the now very annoying trope of the lone mad scientist. (Or maybe it’s Mary Shelley’s fault. I haven’t done enough reading…) But, I’ll give hundred year old novels a bit of a pass on this one.

Likewise, I’ll give it a pass on the only female in the book being Weena, a helpless Eloi who continually needs to be saved and/or protected. For a while, Wells doesn’t describe the Eloi in terms of having gender. They seem to be a rather dim bunch, with a simple language, living in structures that they have not built themselves. Kind of reminded me of villagers in Minecraft…

Overall
I enjoyed The Time Machine. It wasn’t on my March TBR list, but it might have broke my reading slump.