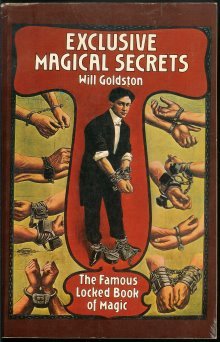 Exclusive Magical Secrets by Will Goldston

Why was I interested in this book?
I was particularly interested in the chapter on Buatier de Kolta and his expanding cube mystery. Buatier’s was a forerunner to Joseffy’s similar trick. The chapter did not disappoint. It presented a nice-sized bio of Buatier and De Kolta, since the origins of the act involved two men.

What Worked
Exclusive Magical Secrets is a weird little collection of magic subjects. There is an range of how-tos from small pocket magic to theater-scale stage illusions, but then there is also the de Kolta bio—the only biography in the book— and individual chapters on subjects like a whist-playing automaton, quick-changes, juggling effects, and a nice bit of philosophy concerning comedy before a section on comedic tricks. (And, yes, a couple escapes contributed by Houdini…)

It took Goldston a decade to put the book together, but he didn’t seem to end up with a cohesive treatise. Instead Exclusive Magical Secrets is sort of a survey on different types of magic that might actually be more useful than if he delved into only one aspect.

What Didn’t Work
Reading about how magic tricks are done can be really boring. Goldston actually has a pretty light touch, but if you’re not really intending to perform the tricks, any instruction can be a little mind-numbing.

Originally published in 1921, it’s also a somewhat dated. Many common objects and situations aren’t so common any more. Also, “Chinese magic” was a prominent fad at the time of the publication. Goldston doesn’t hide the fact than many Chinese acts were performed by white Western magicians, but he also has no problem with that.

Overall
If you don’t want to know how magic tricks are done (even ones that are 100 years old), this isn’t the book for you. If you do want to know how modern magic is done, there are a few tidbits here and there that are still applicable. If you’re into magic history, this is a glimpse into the style of the time with a few glances back to even older magic acts. I picked up my copy used at Bookmans and it was well worth it for the chapter on de Kolta alone.

Visit my Magic Picks shop if you’d like your own copy.
(Amazon associates store)