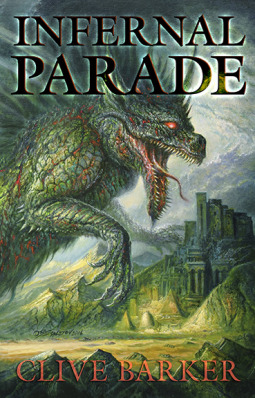 This astonishing novella, Infernal Parade, perfectly encapsulates Barker’s unique abilities. Like the earlier Tortured Souls, an account of bizarre–and agonizing–transformations, Infernal Parade is tightly focused, intensely imagined, and utterly unlike anything else you will ever read. It begins with the tale of a convicted criminal, Tom Requiem, who returns from the brink of death to restore both fear and a touch of awe to a complacent world. Tom becomes the leader of the eponymous “parade,” which ranges from the familiar precincts of North Dakota to the mythical city of Karantica. Golems, vengeful humans both living and dead, and assorted impossible creatures parade across these pages. The result is a series of highly compressed, interrelated narratives that are memorable, disturbing, and impossible to set aside. (via Goodreads)

Why was I interested in this book?
This slim little volume caught my eye when I was browsing the new release shelves at the library. I’m a semi Barker fan; my favorite of his works being the also short The Thief of Always.

What Worked
This novella is a collection of shorter works that chain on to each other, as a parade might. Each focuses on a separate member of the Infernal Parade beginning with their leader Tom Requiem. In total, this all reads a little like an inky black and blood-red (and shorter) version of Ray Bradbury’s From the Dust Returned. These characters form a sort of tense family as they march into the world.

What Didn’t Work
Really, the parade just sort of passes by. There isn’t any real ending or conclusion, or much in the way of purpose to this group of stories. Each chapter is accompanied by an illustration, all very well done, by Bob Eggleton. Honestly, I feel like these vignettes would have been better as a series of comics. Rightly or not, I expect more open-ended storytelling from comics than hardback prose.

Overall
None of the “What Didn’t Work” takes away from the fact that the parade is a creepy good time while its there. I read Infernal Parade first during the readathon a couple weekends ago and it was a great choice to kick things off.