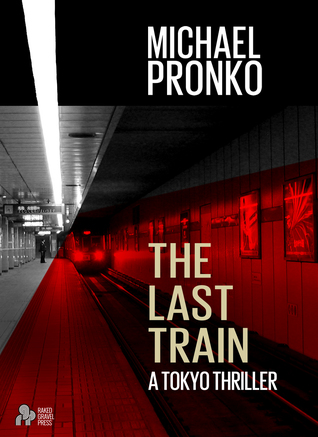 The Last Train by Michael Pronko

Detective Hiroshi Shimizu investigates white collar crime in Tokyo. He’s lost his girlfriend and still dreams of his time studying in America, but with a stable job, his own office and a half-empty apartment, he’s settled in.

When an American businessman turns up dead, his mentor Takamatsu calls him out to the site of a grisly murder. A glimpse from a security camera video suggests the killer was a woman, but in Japan, that seems unlikely. Hiroshi quickly learns how close homicide and suicide can appear in a city full of high-speed trains just a step—or a push—away. (via Goodreads)

Why was I interested in this book?
About two years back, I reviewed Michael Pronko’s Beauty and Chaos, his first collection of essays about Tokyo. A few months back, via a fellow blogger, I saw that Pronko was planning to release a series of Tokyo-based mysteries. I was definitely interest and excited when offered The Last Train to review.

What Worked
The big thing for me: The Last Train has a great sense of place. Considering Beauty and Chaos I expected no less. There are aspects of Tokyo that I was unfamiliar with, like hostess clubs, that got me Googling.

Hiroshi is solid character. Pronko has lived and taught in Tokyo for 20 years, but I was a little concerned about his main character being Japanese. Would a Western guy be able to pull that off? (And can I, not being Japanese myself, even be able to judge that?) From my point of view, Hiroshi’s education and background give him reason to look at the culture around him from a point slightly removed. It’s a little like when I go back to Nebraska after living in Arizona for 17 years—I suddenly remember that college football is a *very big deal* and that the afternoon news includes the prices for hogs and corn.

The key to a good mystery is how well information is revealed to the characters and readers as the story unfolds. It’s no spoiler to mention that Michiko, an ex-hostess, is the antagonist of The Last Train. Chapters are written from her point of view. Doing that and not revealing all of the character’s motivations is a tricky thing to do. Pronko handles it well. The ending of The Last Train felt a little abrupt, but it wasn’t unsatisfying.

What Didn’t Work
A minor thing: Hiroshi’s position within the police force was a little muddled. Though he works white-collar fraud cases, he’s currently under the umbrella of homicide. That is explained by it being a reorganization happenstance, but I think I would have like to have seen Hiroshi even more settled as a pencil-pusher. The circumstances of the case could have brought him in even without the homicide division (mis)connection.

Overall
It looks like there are at least two more Hiroshi thrillers on the way and I’m up for ’em. All the pieces are in place: Hiroshi, his sometimes partner and ex-sumo wrestler Sakaguchi, already put-upon assistant Akiko, and Tokyo as the backdrop. Bring on the next case!