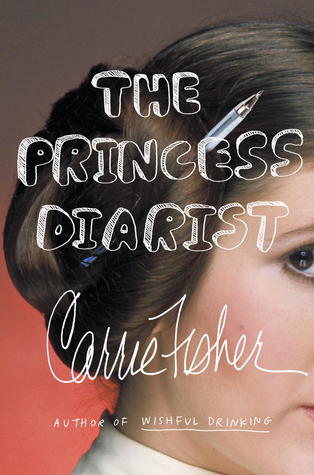 The Princess Diarist by Carrie Fisher

When Carrie Fisher recently discovered the journals she kept during the filming of the first Star Wars movie, she was astonished to see what they had preserved—plaintive love poems, unbridled musings with youthful naiveté, and a vulnerability that she barely recognized. Today, her fame as an author, actress, and pop-culture icon is indisputable, but in 1977, Carrie Fisher was just a teenager with an all-consuming crush on her costar, Harrison Ford.

With these excerpts from her handwritten notebooks, The Princess Diarist is Fisher’s intimate and revealing recollection of what happened on one of the most famous film sets of all time—and what developed behind the scenes. And today, as she reprises her most iconic role for the latest Star Wars trilogy, Fisher also ponders the joys and insanity of celebrity, and the absurdity of a life spawned by Hollywood royalty, only to be surpassed by her own outer-space royalty. (via Goodreads)

I started listening to The Princess Diarist as an audio book sometime back in December or January, but that wasn’t the right time for me. Instead, it wasn’t until I listened to Kevin Smith’s tribute to Carrie Fisher on an episode of SModcast that I finally really wanted to read this book.

Often Doctor Who fans identify their era of Doctor Who with who their Doctor is. Is it Four (Tom Baker)? Or Ten (David Tennant)? James Bond fans do this too. (George Lazenby, anyone?) And maybe Star Wars fans will too. Is Rey your girl? Or Padme? Or Jyn Erso? Or, like me, is Leia your kick-ass, blaster-wielding diplomat alter-ego?

I was three years old when Star Wars came out. I remember seeing it at a drive-in and that was probably more than a year after it came out. I had lots of Star Wars action figures, and all the Leias.

Later in life, I remember being a little disappointed that Carrie Fisher had such a messy life. Forgive me, Carrie, I was young and dumb.

The Princess Diarist is set up into three parts. In the first Fisher tells about her early education and career, getting the job on Star Wars, and how she came to be involved briefly with Harrison Ford.

The second part is the diary she kept during that period. It is, despite the singular situation, very much the diary of a 19-year-old girl. Of course, at the time, Star Wars wasn’t StarWars.  It was just some low-budget sci-fi flick that no one was getting paid very much for. It was a job and Carrie Fisher was an actress who wasn’t even sure she wanted to follow in her celebrity parent’s footsteps.

The third part of the book is Fisher’s musings on the celebrity that Princess Leia brought her. Imagine the nineteen year-old version of yourself being pretty much eternal. Imagine having fans who feel an intimate connection with you due to love of the film. Imagine fans who are a little disappointed that you aren’t entirely Princess Leia.

I’ll never be a blaster-wielding diplomat princess. I’m never going to be a quick-witted superstar writer either. But I wouldn’t mind being a woman who can age and keep a messy life together with and eye-roll and a glitter bomb. That’s something we can all reasonably aspire to.