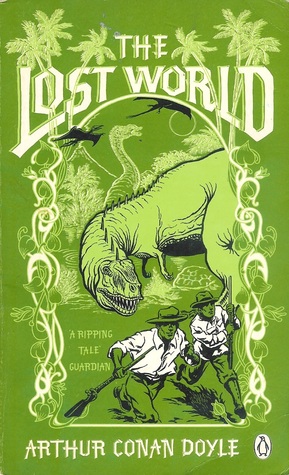 Professor Challenger–Doyle’s most famous character after Sherlock Holmes–leads an expedition into the deepest jungles of South America. Together, the men–a young journalist, an adventurer and an aristocrat–along with their bearers and guides, search for a rumored country and encounter savagery, hardship and betrayal on the way. But things get worse as they get closer to the hidden world they seek. Trapped on an isolated plateau, menaced by hungry carnosaurs, it begins to look as though the expedition may never return. (via Goodreads)

Why was I interested in this book?
Since reading The War of the Worlds back in December, I’ve been working my way through the “scientific romance” genre. I decided to branch out from H. G. Wells and read one of my favorite authors of the era: Arthur Conan Doyle. Of course, I’m not sure I had ever read anything by Arthur Conan Doyle other than his Sherlock Holmes stories…

What Didn’t Work
Remember how in A Study in Scarlet there is a fairly long digression to the Salt Lake Valley and it’s perhaps not the most scintillating of Doyle’s writings? I felt that way about much of The Lost World. Parlors and the backstreets of London seem to be what Doyle does best. The wider world? Maybe not so much. (Doyle is one of my earliest writing influences; I don’t do the wider world any justice either. I blame you, ACD.)

What Worked
The thing that Doyle does do well is create problems for his characters. Being on safari in Brazil to an area filled with strange and dangerous beasts isn’t enough. No, our heroes must be firmly trapped, food and ammo dwindling, on a high plateau filled with dinosaurs and warring clans of natives and ape-men. As ornate as the problems are, so must the solutions be. Of course, Prof. Challenger and the rest are up to the task of escaping and proving to the world that the Lost World exists.

Honestly, I haven’t decided whether the gender politics of the story should go on the pro or con side of this review. The sole female character of this piece is Gladys, the object of affection for our narrator, Ned Malone. Honestly, she doesn’t seem that into Ned and sets him an impossibly task to win her love. I don’t know who’s worse here: Gladys for not telling Ned that she’s not interested, or Ned for buying into her BS and //***SPOILER***// being heart broken when he gets back and finds that she’s married a clerk //***END SPOILER***//. The whole situation almost feels like satire, which I’d be amused by. But I’m not sure it is.

Comparison With Wells
So far in this genre, I find that like Wells’ fiction better. Ranking what I’ve read in the past year would probably go like this:

Two things have thus far stuck out to me. First, Wells doesn’t really give the readers a hero to follow. Yes, there are geniuses in his stories, but they are ambiguous characters at best. Often, the narrator in a Wells tale is only managing to squeak by rather than being particularly heroic. In what I’ve read of Wells, there are no manly man like Prof. Challenger to save the day or even a Ned who is trying his damnedest to prove himself. Wells’ characters are survivors, while Doyle’s are conquerors.

Second, Wells always seems to have a point to make. While I don’t find him particularly preachy, or at least he balances it with entertainment, his views shine through. Doyle, less so. When Challenger and the other explorers help the “Indians” defeat the ape-men, there is some minor note about the horrors of weaponry and a smidge mention of colonialism, but mostly it’s celebration of the modern over the primitive. Mostly, I’m okay with Wells adding some politics to his stories.

Overall
The other two Professor Challenger stories sound very different from The Lost World, so I’ll probably give them a look. But probably not before I read more Wells.

1 thought on “Review ~ The Lost World”