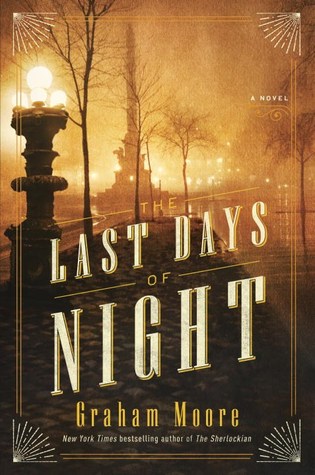 The Last Days of Night by Graham Moore

New York, 1888. Gas lamps still flicker in the city streets, but the miracle of electric light is in its infancy. The person who controls the means to turn night into day will make history–and a vast fortune. A young untested lawyer named Paul Cravath, fresh out of Columbia Law School, takes a case that seems impossible to win. Paul’s client, George Westinghouse, has been sued by Thomas Edison over a billion-dollar question: Who invented the light bulb and holds the right to power the country?

The case affords Paul entry to the heady world of high society–the glittering parties in Gramercy Park mansions, and the more insidious dealings done behind closed doors. The task facing him is beyond daunting. Edison is a wily, dangerous opponent with vast resources at his disposal–private spies, newspapers in his pocket, and the backing of J. P. Morgan himself. Yet this unknown lawyer shares with his famous adversary a compulsion to win at all costs. How will he do it?

In obsessive pursuit of victory, Paul crosses paths with Nikola Tesla, an eccentric, brilliant inventor who may hold the key to defeating Edison, and with Agnes Huntington, a beautiful opera singer who proves to be a flawless performer on stage and off. As Paul takes greater and greater risks, he’ll find that everyone in his path is playing their own game, and no one is quite who they seem. (via Goodreads)

Why was I interested in this book?
The late 19th century is a time of fantastic innovation. It was, as this book is titled, the last days of night before prevalence of electric lighting. This is also a time of industrialization of innovations. In the U.S., the notion of patrons directing invention was never a thing. Instead it’s patents and investments. And at the heart of the current war are Thomas Edison and George Westinghouse.

What Worked
Using the point of view of Paul Cravath, a lawyer, Moore allows the story to be, well, a story instead of a primer on electricity. Having said that, The Last Days of Night is more technologically sound than historically sound. All the characters are based on real people, even Paul, but characters are embellished and the events are consolidated and rearranged to serve the story. For the most part, this didn’t bug me as much as it has with other works.

Moore begins every chapter with an epigraph. These epigraphs are quotes by contemporaries of the story like Edison, Westinghouse, and Tesla or modern innovators and technologists like Bill Gates, Steve Jobs, and Karl Popper. The use of our present day Edison/Westinghouse—Gates and Jobs—give the story a feeling of scope. After all, isn’t the Apple/Microsoft desktop lawsuit the 20th century’s current war?

What Didn’t Work
While The Last Days of Night doesn’t get bogged down by the science-y aspects of the story, it also doesn’t have more than one speed. It chugs along at a good pace, but it lacks any of the tempo changes that signifies that something is actually happening in the story. The ending in particular felt flat to me and rather “Hollywood” in the way many things were wrapped up.

Overall
About mid-way through the books I felt that it would make a pretty good TV show. I later found out that it had already been optioned for a film with Moore serving as screenwriter. Indeed, Graham Moore wrote (and won an Oscar for) the screenplay for The Imitation Game, a movie that annoyed me a bit with the “Hollywood” rounding of Alan Turing’s story. Still, I’ll probably give The Last Days of Night a watch if it ever gets made. I like the period and I like the characters. The story can stand by itself.