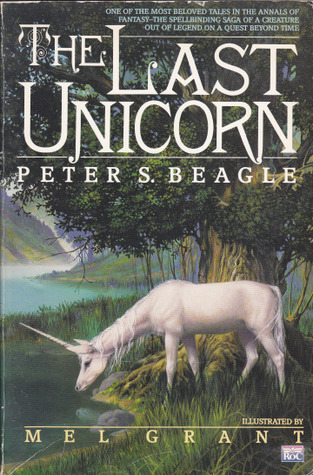 She was magical, beautiful beyond belief — and completely alone…

The unicorn had lived since before memory in a forest where death could touch nothing. Maidens who caught a glimpse of her glory were blessed by enchantment they would never forget. But outside her wondrous realm, dark whispers and rumors carried a message she could not ignore: “Unicorns are gone from the world.”

Aided by a bumbling magician and a indomitable spinster, she set out to learn the truth. but she feared even her immortal wisdom meant nothing in a world where a mad king’s curse and terror incarnate lived only to stalk the last unicorn to her doom… (via Goodreads)

Why was I interested in this book?
I’m currently writing what I’m referring to as “light fantasy”: fantasy with more humorous animals and sly curses than armies and thrones. So, I decided to reread some of my favorites of the genre.

What Worked
During this reread, I noticed the themes of ownership more. I’ve always been intrigued by Mommy Fortuna’s  line “You never could have freed yourselves alone! I held you!” It’s a sentiment that is echoed over and over again as each character gains and loses something, but with attention that can be focused on the fate of that owned thing.

What Didn’t Work
I read aloud the first couple chapters of The Last Unicorn on our way back from Sacramento. I had noticed in Beagle’s last book, In Calabria, that occasionally the use of similes and metaphors is a bit…excessive. I had never really noticed it in Unicorn until I was reading it to Eric. I think our conversation went a bit like this:

Takeaway, in my own writing, make the similes special.

Overall
Still my favorite book. Peter S. Beagle, still one of my favorite writers. I’ll be reviewing his newest collection The Overneath in a couple month’s time.