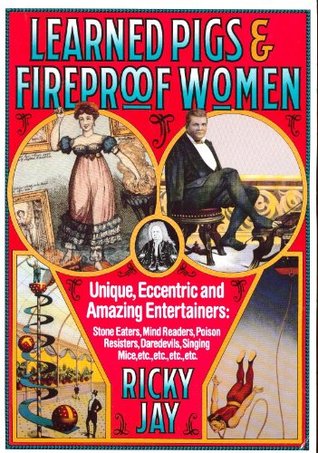 Ricky Jay is one of the world’s great sleight-of-hand artists. He is also a most unusual and talented scholar, specializing in the bizarre, exotic, and fantastic side of the human species. The youngest magician to have appeared on television, Jay has become well known for his astonishing stage show as well as for his cameos in such movies as Glengarry Glen Ross and, most recently, Boogie Nights.

Jay’s unparalleled collection of books, posters, photographs, programs, broadsides, and, most important, data about unjustifiably forgotten entertainers all over the world made this unique book possible. An investigation into the inspired world of sideshows, circuses, and singularly talented performers, Learned Pigs and Fireproof Women is history of the most unusual–and irresistible–sort. (via Goodreads)

Amusing that the above summary was written so long ago that it doesn’t mention Ricky Jay’s work on The Prestige, The Illusionist (as a consultant), and Deadwood.

Why was I interested in this book?
Ricky Jay is a fabulous magician. He’s probably my favorite behind Teller/Penn & Teller. He’s also a magic historian and a historian of singular entertainments. Many acts, like pigs that can do math and women who can withstand the heat of an oven to emerge with perfectly cooked steaks, share an aspect of deception with the only slightly more respectable profession of magician.

What Worked
A few years back I read Harry Houdini’s Miracle Mongers and Their Methods, which covers a similar territory, but in a much more shallow way. Ricky Jay truly loves his subjects and knows their histories. You might think that fire-resisters, poison-eaters (as well as frog-eaters—I’m looking at you David Blaine),  mnemonists, and “carnie” acts like extraordinary artists with physical disabilities are of 20th or even only 19th century origin, but you’d be wrong. Many of these acts have lineage in the 17th and 18th centuries.

For example, one of Jay’s favorite subjects, Matthew Buchinger, was born in 1674. Buchinger was a magician, musician, and calligrapher despite being twenty-nine inches in height and lacking legs, feet, or hands. All of the stories in this books are well-sourced and the book contains a goodly number of plates, poster, and photos (on the rare occasions that Learned Pigs ventures beyond the 1850s).

Unlike Houdini’s book, Jay isn’t really interested in “their methods.” But if it comes up, there isn’t any modern-day supposing. Fire-resister and poison-eater Chabert was taken to task by medical professionals of his day because he claimed he had cures for scurvy and typhoid. The exposure of other parts of act followed in the press.

What Didn’t Work
Less, “what didn’t work” and more “why it took me over two years to finish this book”: It’s dense. It’s diverse. Ricky Jay’s writing style (and patter style) is very much informed by the histories he’s obsessed with. To illustrate, this is one of my favorite routines of his, entitled “The History Lesson.”

The book is written in beautiful, entertaining language, but it isn’t a quick read.

Overall
This is definitely a dip-in book. Read a chapter here, dazzle at a poster there. Worth the time, but not to be consumed in one sitting. Unless you have a stone-eater’s fortitude.